I was contacted by a panicked client, who over the years has become a good friend (RG), she had volunteered to bring holiday treats to her son’s third grade class party. This phone call was initiated late Saturday evening and  the party is this Thursday; as my client anxiously explained she had forgotten about the commitment, between work and her other children. Knowing this time of year, we are inundated with obligations (I also have a tendency to hardly ever say no) she felt bad asking if I could bake sweet goodies for her son’s party. Did I mention she hates baking. Without any hesitation I proclaimed I would be happy to oblige, we chatted a little while longer, I was able to learn her son loves snowflakes, white chocolate and she wanted to serve a treat like no other in the past. I asked her if any of the students had nut allergies and  luckily there were no children in his class that had any nut allergies. I now had the enough information to design RG unique and extraordinary holiday treats. I had just baked some Opéra Cakes for my family to try, so Joconde was on my brain. 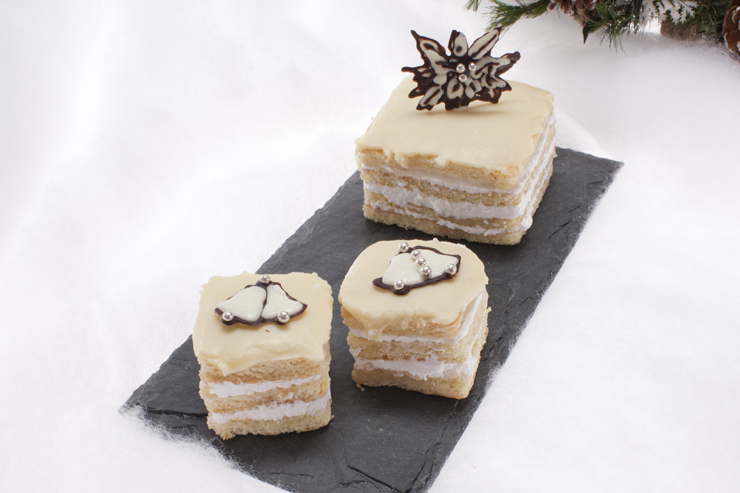 Sydney and I had this wild idea we could create  similar individual cakes, shaped like snowflakes. Now as much as we love baking, opéra cakes for 20 third graders seemed a bit much, however we resolved to create what I am going to call a “pseudo opéra cake or more like a joconde petit four.” What that means is we had many of the elements of the opéra cake, but we took a short cut (we did  not make or use buttercream), they ended up being delicious according to RG. 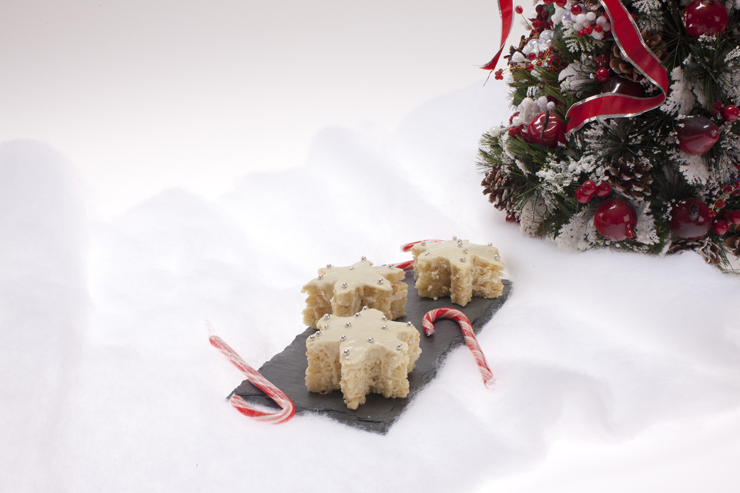 Snowflakes on the runway

Now if anyone has ever created an opéra cake they know the layered cake is trimmed as the last step. The cake looks clean and supreme, however the Winter Wonderland Snowflakes needed to be shaped with angles and ridges, so instead of using a sharp knife and cutting them free hand , I grabbed a deep snowflake cookie cutter. Sydney still went through them with a sharp knife and cleaned them up after being cut. 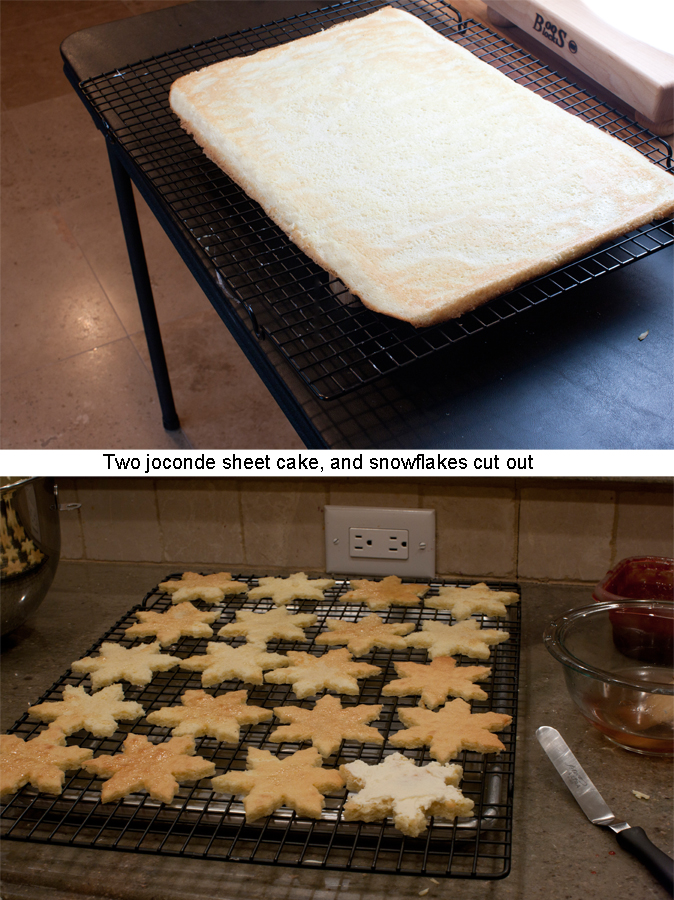 We were worried the cookie cutter would not be able to reach the bottom of all four layers, so the decision was made to cut the snowflakes on the single layer of each Joconde (two inch 15 1/ 2 x 12 /12) that was the simplest and fastest part of the biscuit. Trial by error is how we finally figured the best way was to coat and layer the biscuits with cookie cutter around the cakes. 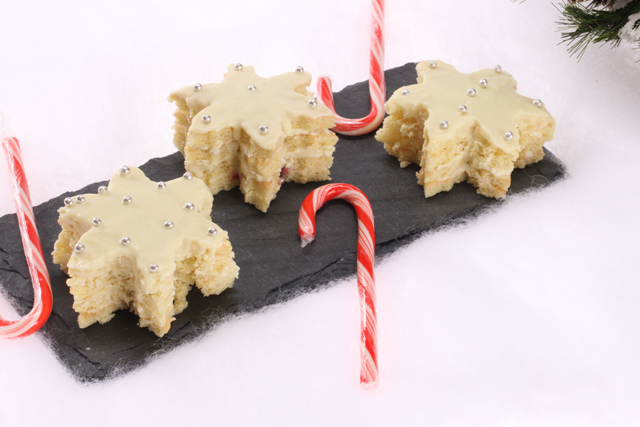 After spreading a thin layer of chocolate glaze on the first (bottom) snowflake, waiting till the glaze harden, we turned over the snowflake cut out. Sydney had the brilliant idea to place the cookie cutter on top of the first layer. Now the Joconde was nestled inside the snowflake making it easier to spread the mousse, raspberry jam, and white chocolate glaze.

The method for these little beauties is the same as The Christmas Opéra Cake except we decided to used 1/2 almond flour and half hazelnut  flour for this recipe. Either recipes will work and the joconde will be heavenly exquisite, they are inter changeable.

Using a food processor fitted with a metal chopping blade, process the almonds to a very fine cornmeal-like texture. You can do the exact same procedure with the hazelnuts or purchase hazelnut flour

In a bowl of you standing mixer with the paddle attachment, on low speed mix the almond flour, icing sugar, and cake flour, just until combined. Increase the mixer to medium-low speed, beat 1 egg at a time  making sure each egg is beaten for a couple minutes, occasionally scraping down the sides. It is imperative that each egg is added and beaten for a couple of minutes. Once all five eggs are incorporated continue to beat, on medium speed for 4 minute insuring that as much air as possible has been incorporated.  The mixture should be pale yellow in color and voluminous. Set the batter aside, or if you do not have another mixer bowl scrape the batter into different bowl.

In a very clean bowl of your standing mixer fitted with the whisk attachment beat the egg whites and egg white powder on medium speed to aerate. When the egg whites begin to form soft peaks slowly add the granulated sugar and whisk until the peaks are stiff and glossy. Keep a carefully eye on the egg whites they can very quickly turn from satin shiny glossy peaks to gloomy dry and an over mixed nightmare. (If this happens don’t panic, however you will need to repeat the process with five more egg whites).

Bring the sugar and water to a boil in a heavy bottom saucepan; cook till the sugar is dissolved. Pour the syrup into a glass-measuring jug and add Framboise when the syrup has cooled. Brush each layer of the cake with the Framboise syrup and allow the syrup to soak into the cake.

*If you are uncomfortable using alcohol substitute raspberry extract or essence, 2 -teaspoons of extract or 1/2 -teaspoon essence will be just the right amount! 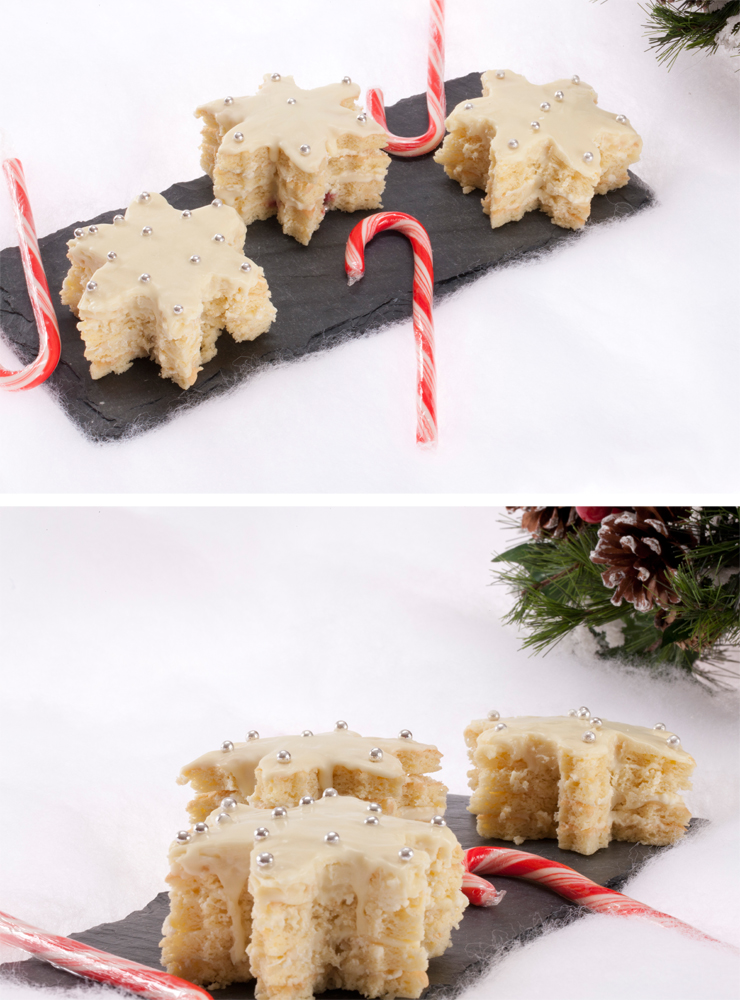 In a baine marie of double boiler melt the white chocolate, making a ganache and set aside.

Heat the  lavender honey to lukewarm. Pour the honey in a slow steady stream in a bowl with the egg yolks and whisk until thick, about a few minutes.

Warm 110 grams/ ½-cup of the cream in a heavy-bottomed saucepan over medium heat, about 3 to 5 minutes. Slowly whisk the cream into the egg yolks.

Return the cream mixture to the saucepan and cook over medium-low heat, stirring constantly. As the honey cream cooks and thickens, stir with both a whisk and a wooden spoon, switching back and forth between the two. Cook until thick. Remove from the heat and slowly whisk in the melted white chocolate. Transfer the honey cream mixture to a bowl and cool over an ice bath, stirring frequently with a rubber spatula.

Using either standing mixer with the whisk attachment or a hand mixer, on medium speed, whip the egg whites to a foam stage. Slowly and carefully add ½-Tablespoon the sugar and lavender essence. Continue to whip adding ½-Tablespoon of sugar till firm shiny peaks form.

Using a rubber spatula in two batches fold with a gentle hand the egg whites to the chocolate crème. Be careful to not let the mousse deflate.

1 10 ounce jar, if you are unable to locate seedless, don’t sweat it just put the jam/preserves through fine sieve.

To make the white chocolate glaze, you will need two separate prepared batches.

Melt the white chocolate with the heavy cream. Whisk gently until smooth. Let cool for 10 minutes and then pour over the chilled cake. Using an offset  metal cake spatula, smooth out into an even layer. Place the cake into the refrigerator for 30 minutes, or until the glaze has set.

Assembly of the Opéra cake: 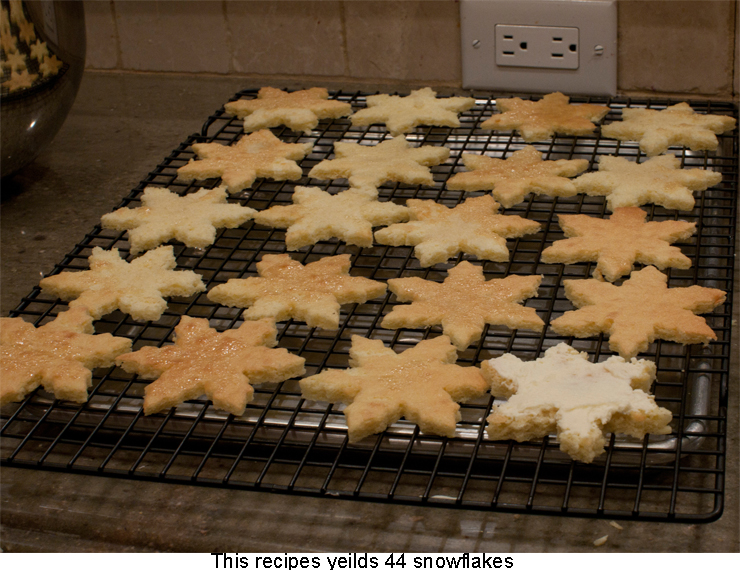 Brush the top of the bottom layer of biscuit with the framboise syrup using an offset metal spatula spread an even and smooth layer of the white chocolate glaze about 6-mm (1/4-inch think) top this layer with a second biscuit carefully pressing down to adhere the layer.

Glaze the top of the opéra cake by pouring the chocolate glaze over the cake . Using an offset metal cake spatula, smooth out into an even layer. Place the cake into the refrigerator for 30 minutes, or until the glaze has set.

Take the cake out of the refrigerator, have a sharp knife, a bowl of hot water and a clean kitchen towel near the cake. Dip the knife in the hot water, wipe it dry, and begin cutting the cake neatly around the pattern. I won’t lie this was daunting, but I did deliver the “WOW” factor RG wanted! 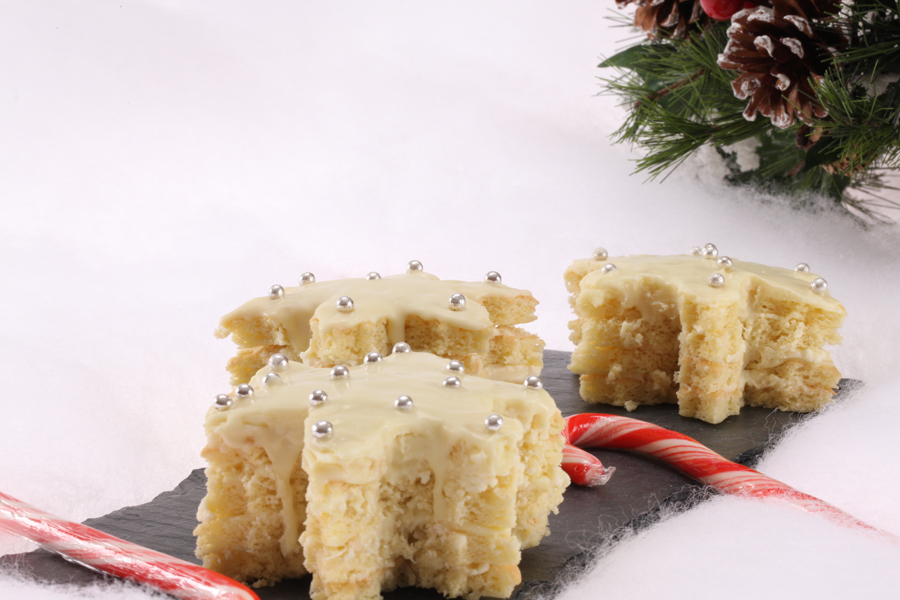 Sydney had the idea of adding silver dragees, edible of course, to give a glistening effect.

I was elated to hear that RG, her son, and the class, including the teacher, loved the joconde snowflakes. I am sure it seems odd to have these elaborate pastries for a third grade party, but I believe if children are introduced to different types of food at a young age they will not be picky eaters, and the holidays are the time of the year to go over the top! 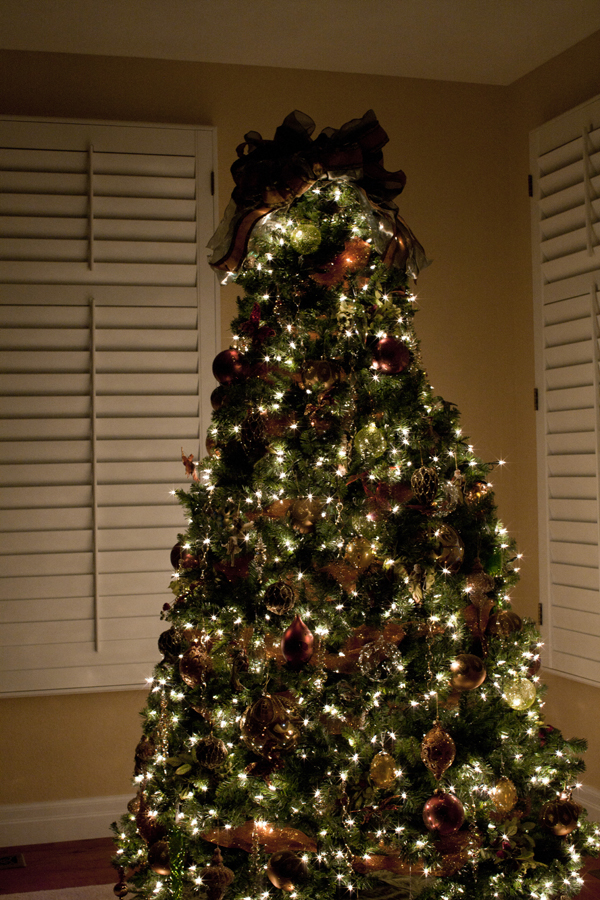