Each year our family takes turns picking out what our Christmas dinner will consist of; this year Sydney is the person to choose the main course and it is my turn to choose all of the desserts (generally there are about three different ones). Lucky me! Last year Sydney chose the the desserts a Pavlova, a Panetone with Zabaglione Trifle, and  Special Noto Cheesecake with a mini chocolate chip crust. I wanted to have a truly unique dessert that would be festive. After days of contemplating I arrived on The Opéra Cake, it is elegant, delicate, and beautiful. 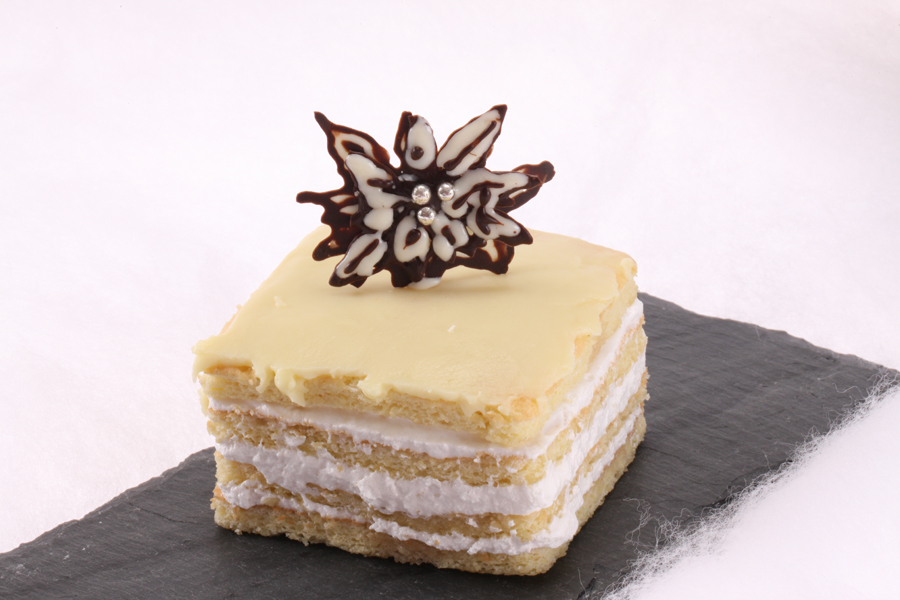 A  traditional Opera Cake is a type of French cake. “It is made with layers of almond sponge cake (known as Joconde in French), soaked in coffee syrup, layered with ganache and coffee buttercream, and covered in a chocolate glaze. According to Larousse Gastronomique Opéra gateau is an elaborate almond sponge cake with a coffee and chocolate filling and icing.” This cake was popularized by the French pâtisserie house Dalloyau. Dori Greenspan in her book Paris Sweets has an adapted recipe from Dalloyau.

As you can see I did not follow the tradition Opéra Cake, though it is a wonderful cake the traditional design has dark colors through out, I wanted my cake to look more wintery and scream of the Christmas season. Instead of the coffee syrup I used Framboise, I did not make a buttercream, but a marshmallow meringue, and I used all white chocolate, except for the top in which I used bittersweet chocolate for the poinsettia and bells' outline. I will say the Dalloyau Opéra is heavenly and worth baking or buying!

We began as we do with all our recipes by preparing our mise en place, we measured all of our ingredients, grabbed the standing mixer, bowls, 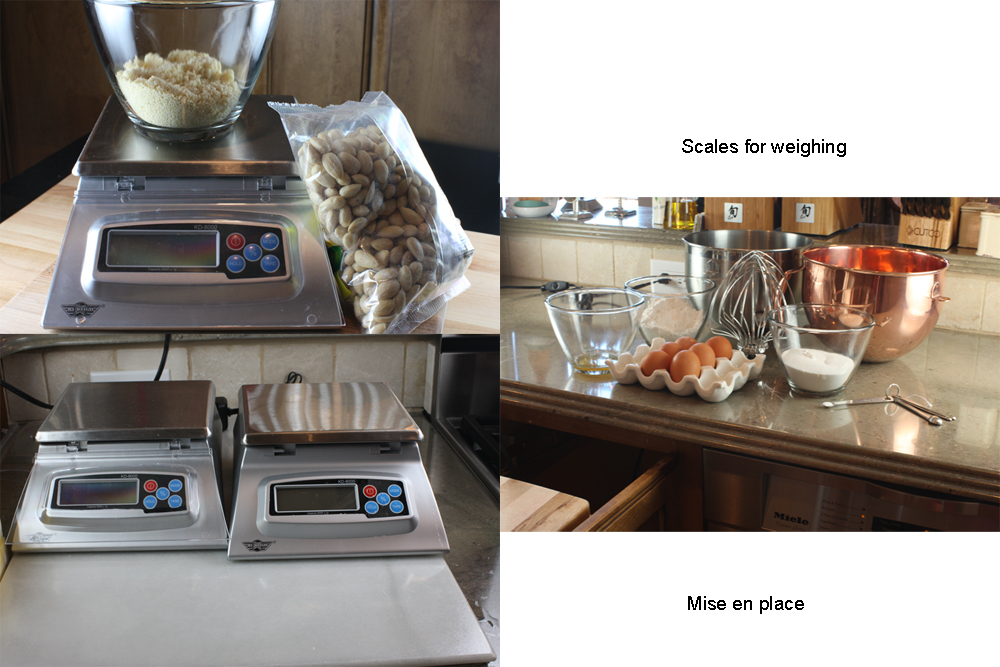 Since I did not have enough almond flour I took out the food processor and ground up whole almonds. Generally I like to grinding my own almond flour with whole almonds; I find I gain a longer shelf life, without having to store the almond flour in the freezer.

There I go again off the topic at hand: back to the opéra cake. Since the flavor of beurre noisette, brown butter, has more depth, I melted, clarified, and browned 31 grams of butter, poured into a small glass bowl to cool down. I then melted about the same amount of butter again, except I did not allow to brown, instead I grabbed a pastry brush, and brushed the butter amongst  two 15 1/2 x 12 1/2 jellyroll pans, lined with parchment paper (I buttered prior to lining the pans and on top of parchment paper, set the prepared pans to the side.

The Joconde in the simplest terms is similar to the sponge cake except it is created with almond flour along with either cake or all purpose flour. Our preference is cake flour, but most recipes for the joconde calls for all-purpose. The cake itself is created by folding meringue into whole eggs, almond, icing sugar, flour, and butter. 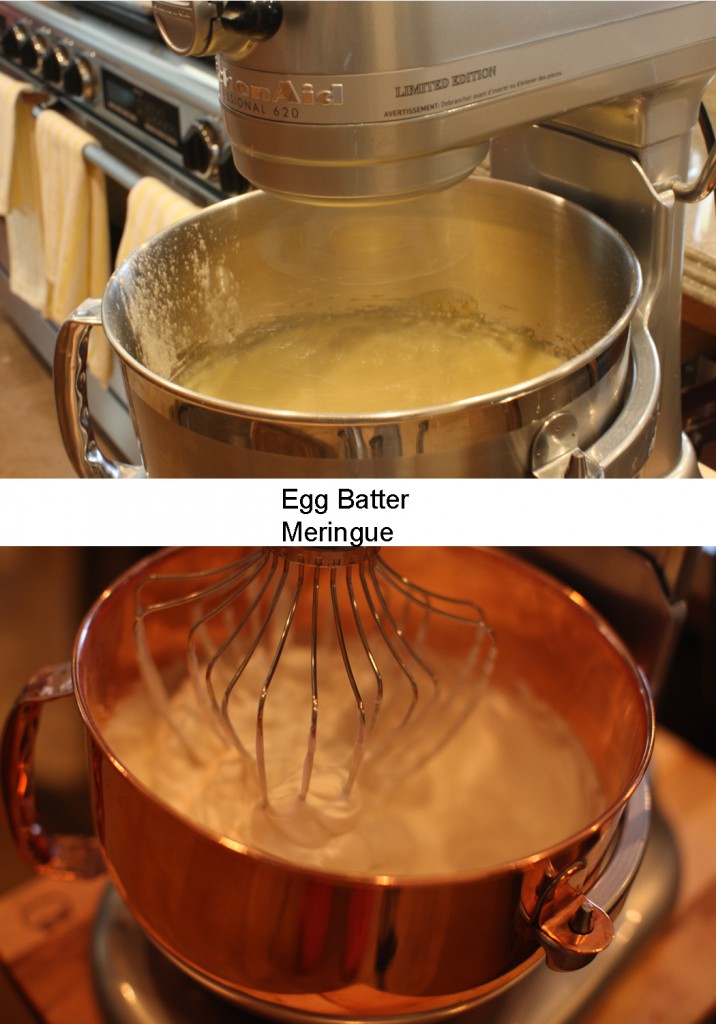 Using a food processor fitted with a metal chopping blade, process the almonds to a very fine cornmeal-like texture.

In a bowl of you standing mixer with the paddle attachment, on low speed mix the almond flour, icing sugar, and cake flour, just until combined. Increase the mixer to medium-low speed, beat 1 egg at a time  making sure each egg is beaten for a couple minutes, occasionally scraping down the sides. It is imperative that each egg is added and beaten for a couple of minutes . Once all six eggs are incorporated continue to beat, on medium speed for 4 minute insuring that as much air as possible has been incorporated.  The mixture should be pale yellow in color and voluminous. Set the batter aside, or if you do not have another mixer bowl scrape the batter into different bowl.

In a very clean bowl of your standing mixer fitted with the whisk attachment beat the egg whites and egg white powder on medium speed to aerate. When the egg whites begin to form soft peaks slowly add the granulated sugar and whisk until the peaks are stiff and glossy. Keep a carefully eye on the egg whites they can very quickly turn from satin shiny glossy peaks to gloomy dry and an over mixed nightmare. ( If this happens don't panic, however you will need to repeat the process with six more egg whites). 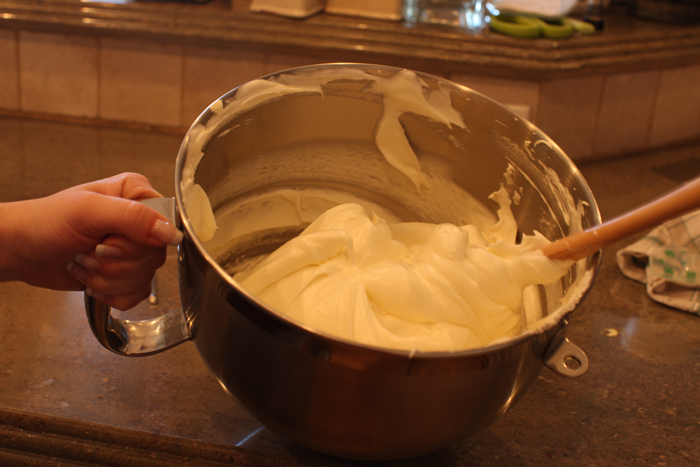 Carefully pour the batter equally into the prepared pans, smoothing it into an even layer. DO NOT press down or the batter will loose volume and the cake will be tough.

Bake the cake layers until they are lightly browned and just springy to the touch, about 5 to 8 minutes (every oven is different so keep a close eye on it). Remove from the oven and invert the cake onto a cool sheet pan or a wire rack, peel off the parchment paper and cool completely. Using a sharp serrated knife cut the cake crosswise into four equal pieces. 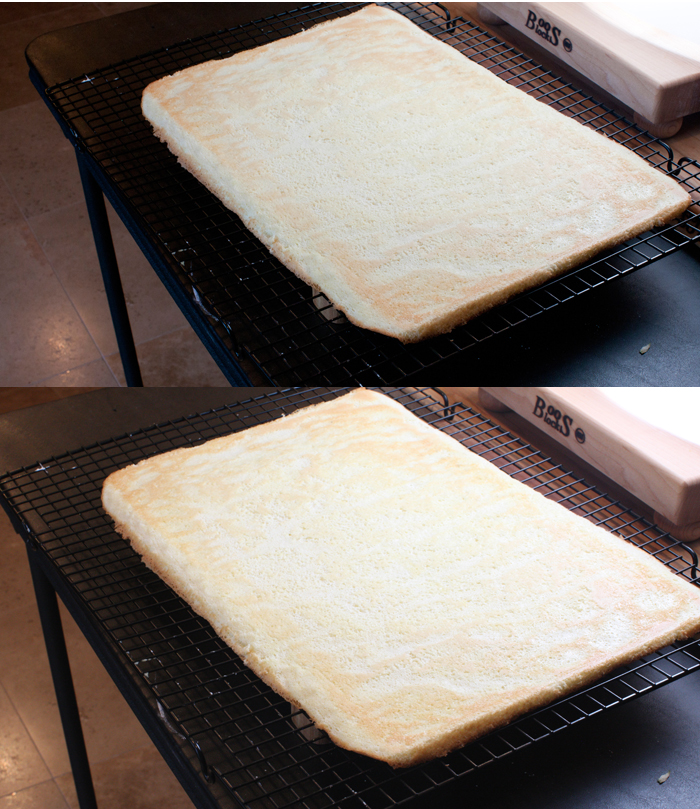 Bring the sugar and water to a boil in a heavy bottom saucepan; cook till the sugar is dissolved. Pour the syrup into a glass-measuring jug and add Framboise when the syrup has cooled. Brush each layer of the cake with the Framboise syrup and allow the syrup to soak into the cake.

In a baine marie of double boiler melt the white chocolate, making a ganache and set aside.

In a clean cold bowl of your standing mixer with the whisk attachment on medium speed whip the cold cream till soft peaks just begin to form add framboise. Reduce the speed to medium-low, slowly add the white chocolate ganache till medium-soft peaks form  and place in the refrigerator till ready for use. You may have to whip lightly again.

Using a hand mixer, on medium speed, whip the egg whites to a foam stage. Slowly and carefully add 1/2 the sugar and raspberry essence whip till medium peaks, add the last 1/2 of sugar  and whip till firm, shiny peaks and set aside.

Using a large rubber spatula carefully with a gently hand fold the meringue into the white chocolate whip cream.

In a copper bowl, combine the egg whites,  water, and sugar in the top of a double boiler. Whisk with a hand held mixer on high until foamy and combined. Place over boiling water and whisk constantly with a hand mixer until the frosting is stiff and holds peaks, about 7-8 minutes. Remove from the heat and whisk in the almond extract. Let cool, whisking often.

Using a large rubber spatula quickly and carefully fold the meringue in two batches into the white chocolate whipped cream.

Melt the white chocolate with the heavy cream. Whisk gently until smooth. Let cool for 10 minutes and then pour over the chilled cake . Using an offset  metal cake spatula, smooth out into an even layer. Place the cake into the refrigerator for 30 minutes, or until the glaze has set.

Assembly of the Opéra cake:

Brush the top of the bottom layer of biscuit with the framboise syrup using an of set metal spatula spread an even an smooth layer the white chocolate glaze about 6-mm (1/4-inch think) top this layer with a second biscuit carefully pressing down to adhere the layer.

With an off set spatula spread evenly and as smoothly as possible  the White Chocolate-Raspberry Mousse about 6-mm (1/4 -inch think) layer, top with the third layer of the cake, pressing down with a gentle hand adhere the new layer to the previous layer. Brush again a generous amount of the framboise syrup. Carefully spread evenly and smoothly the Meringue Frosting about 6-mm (1/4-inch) thick layer and top with the final layer again gently pressing down just to adhere to the previous layer, brush with the framboise syrup.

Glaze the top of the opéra cake by pouring over the cake . Using an offset metal cake spatula, smooth out into an even layer. Place the cake into the refrigerator for 30 minutes, or until the glaze has set.

Take the cake out of the refrigerator, have a sharp knife, a bowl of hot water and a clean kitchen towel near the cake. Dip the knife in the hot water, wipe it dry, and begin cutting the cake neatly, into even shapes, and clean off any ragged edges. 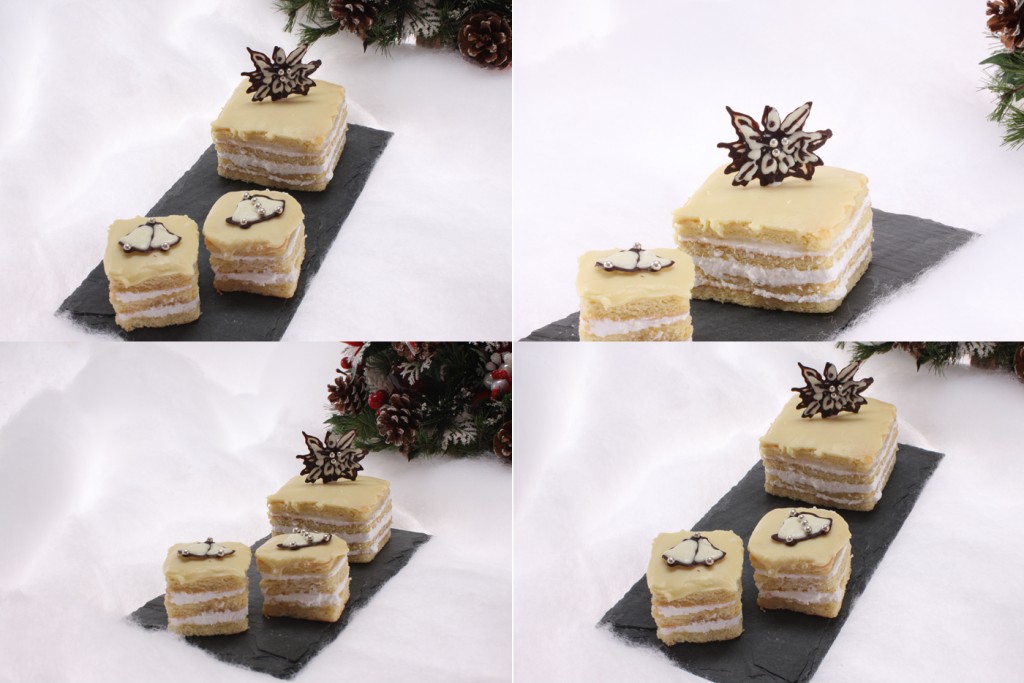 Make sure to cut all all the way though the layers of the opéra cake.

You can top the opéra cake with any decorative chocolate design.

Do not over fold the batters they will deflate.

There should be just enough batter to cover the sheet pans in a thin even layer.

If the Jaconde is over cooked or a little dry brush with framboise syrup lightly  and place in the refrigerator for several hours to soften.

It is best to use the white chocolate ganache as soon as it is ready.

Make two batches of the white chocolate ganache as the are batches needed.

Make sure to whisk the white chocolate ganache! 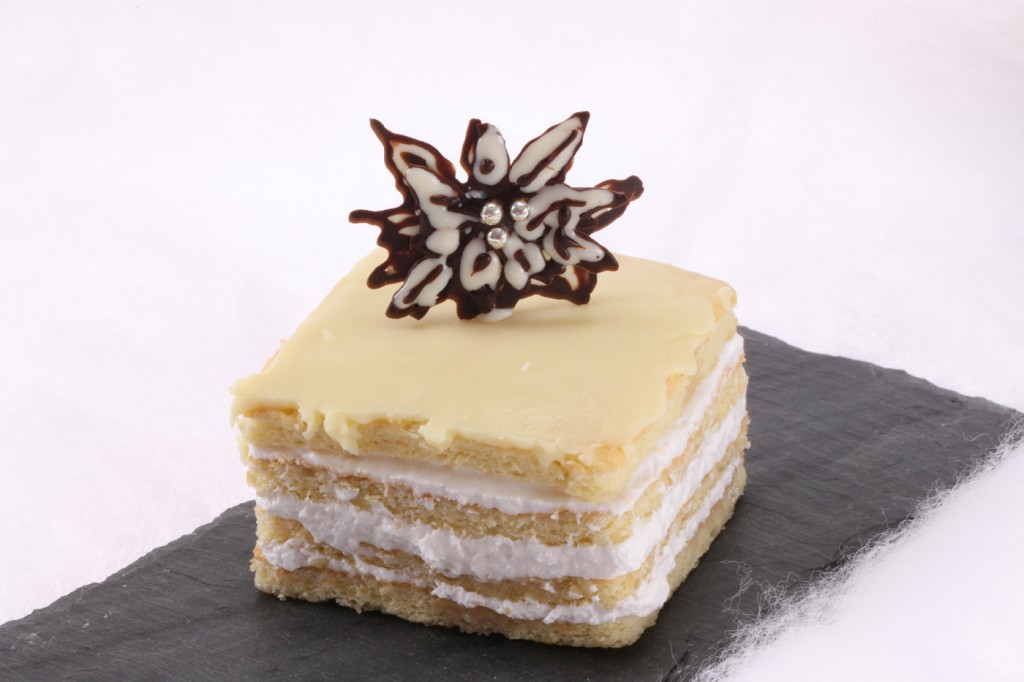 I chose poinsettias and Bells for Christmas top.