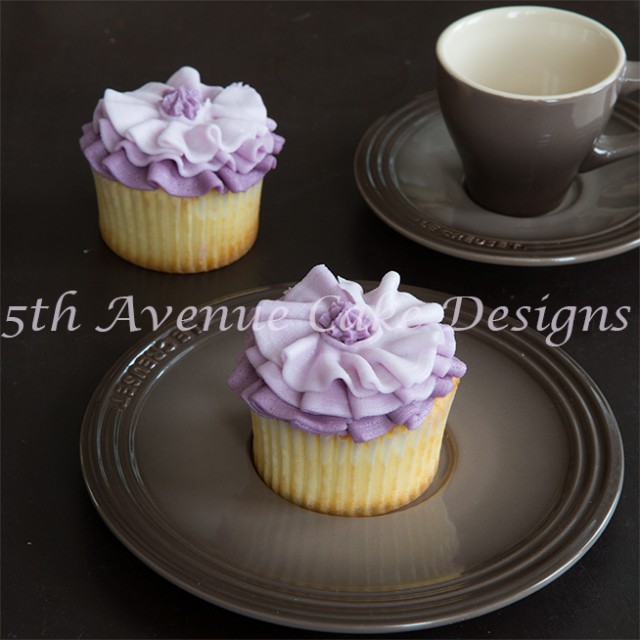 Nothing is more mystical than a cupcake or cake adorned in ruffles. Although I general use royal icing or fondant for fashion inspired cake decorating; buttercream has a soft fluffy appearance. The buttercream ruffle entices your eyes to dance, the anticipation of that first bite becomes overwhelming. You begin to fell like a “kid in a candy store,” once you finally are able to taste (or better yet eat) your  achieved palatable nirvana! Now you wonder if it is polite to have seconds.

The best part about buttercream ruffles on a cupcake or a cake is how fast and easy it is to create once you understand the method.

This tutorial will show you how to design a fabric inspired buttercream cupcake. The technique can easily be transferred to a cake. 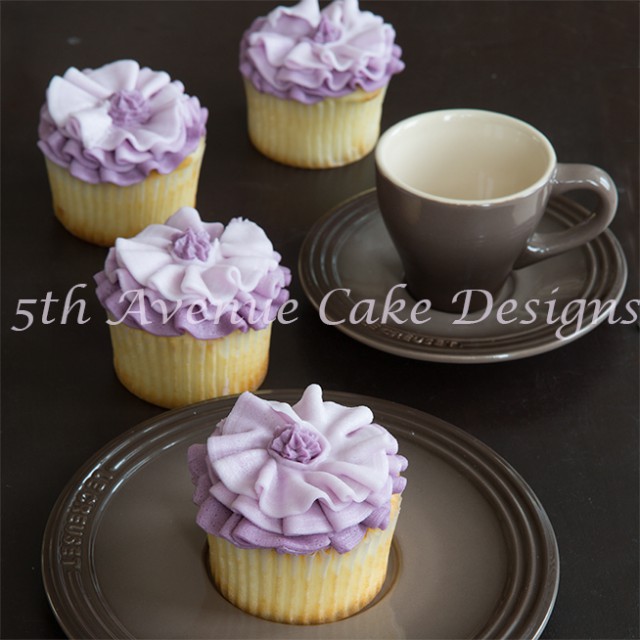 Which one should I eat first?

Allow the cupcakes to completely cool. If your tops are domed level them by cutting the cupcake with a serrated knife.

The first step is to mix your monochromatic colors, start with the darkest color, and depending on the amount of tones/tints you want to separate the darkest or base color between glass bowls. We chose three tones the base color was deep violet, the second color medium violet, and last was light violet.  I have found using toothpicks or cocktail sticks is the most efficient procedure to color the buttercream. Slowly add .64 cm/ 1/4 up the toothpick of color until you achieve the color you want.

Once all the colors are amalgamated  in the buttercream place the violet colors into your piping bags fitted with couplers and tip/tube #070 fitted with the darkest violet. 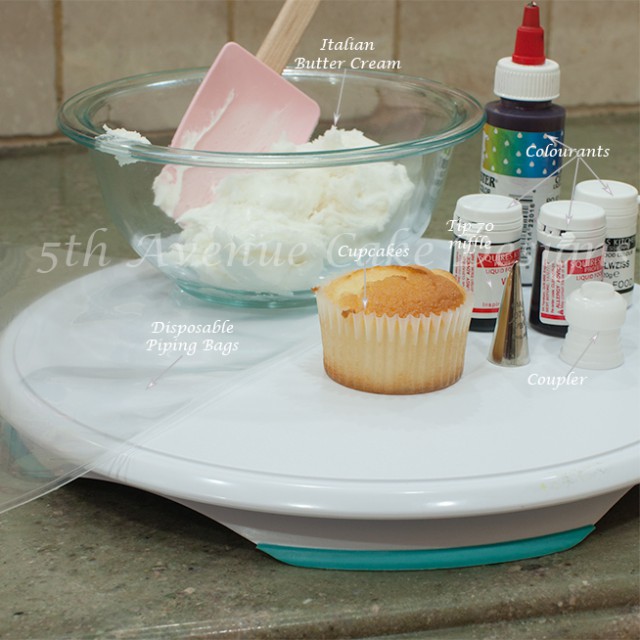 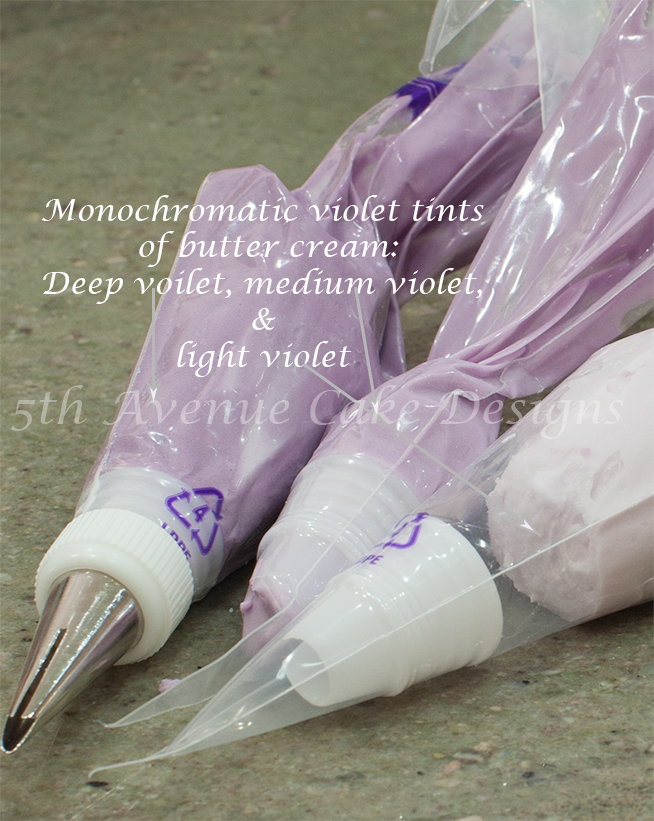 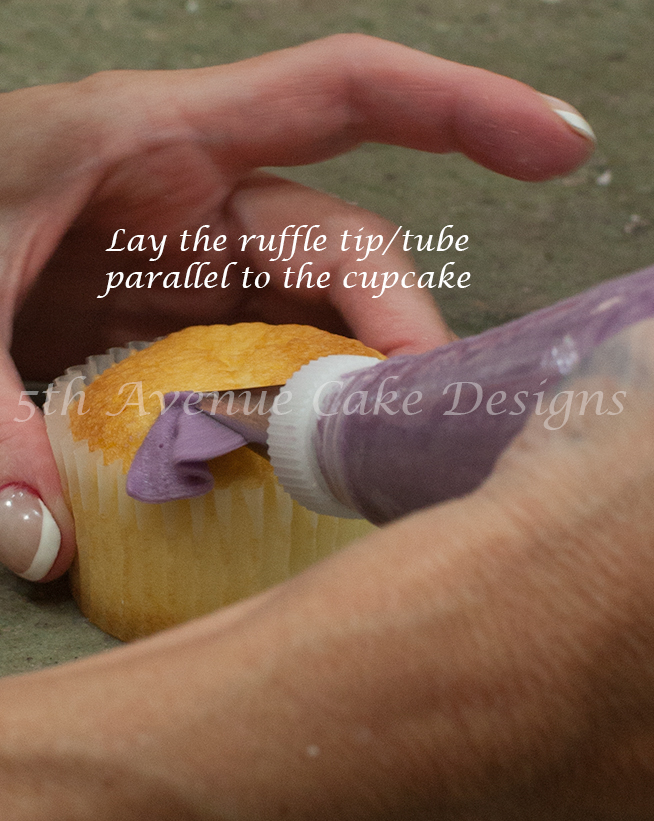 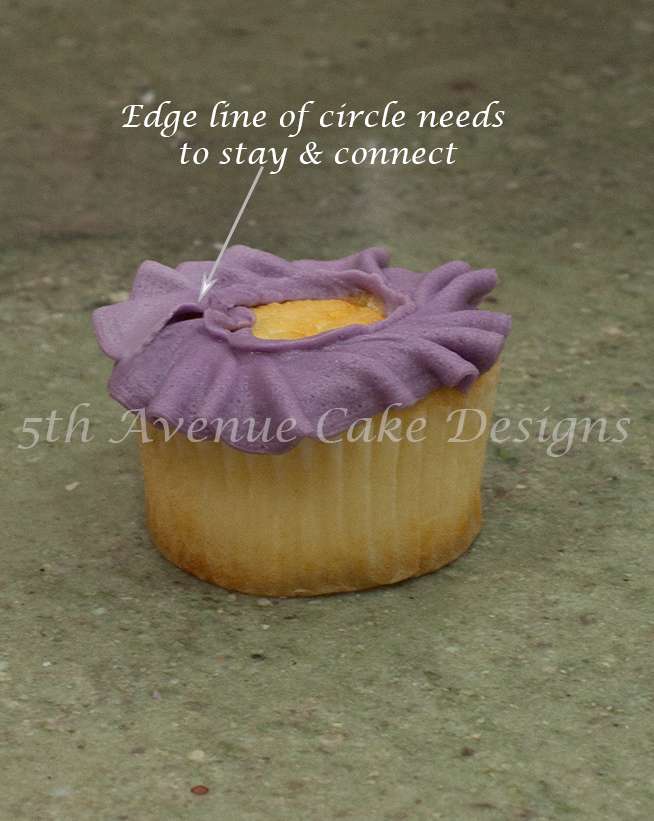 Pointers for success keep your tip/tube the same width all the way around, start and end at the same spot, and begin each layer of color at the same spot as the first layer. As you pipe the ruffle you will notice a band, like a curtain line, place the your next two colors slightly above the band of the previous color, and adorn the center with a star tip (we used #18). Place the star tip directly into the center of the ruffle circle at a 90 degree angle with even steady pressure pipe the star and pull as you ease off the pressure once the bottom of the star is full. 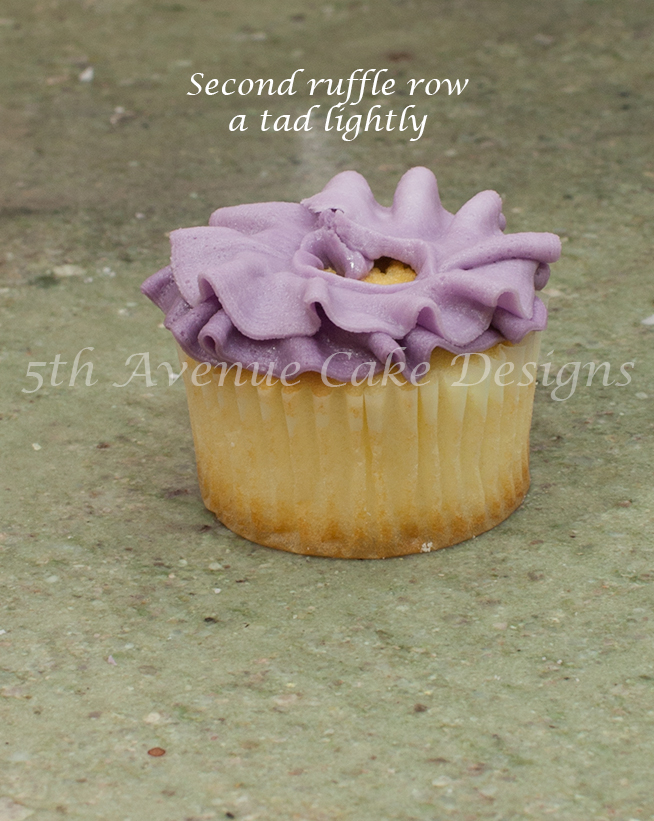 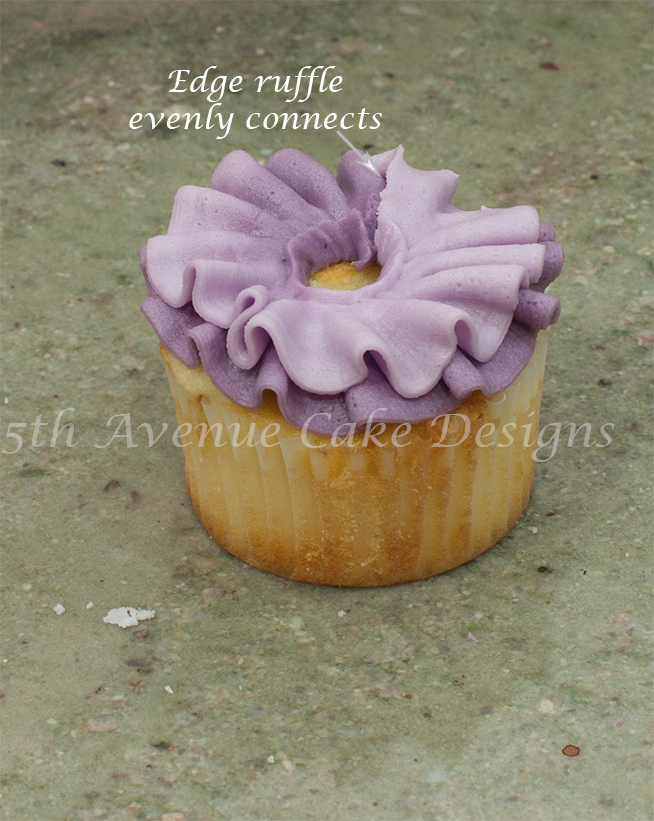 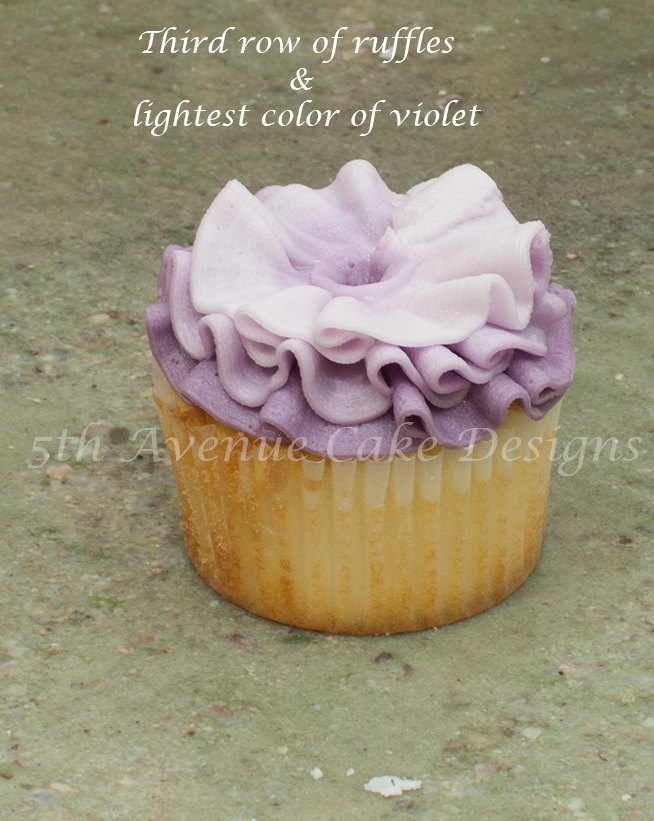 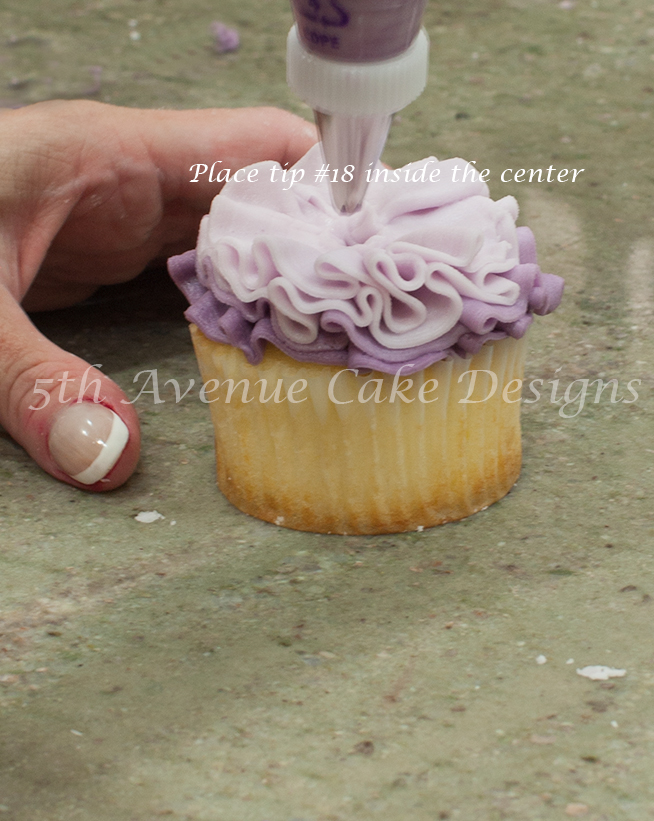 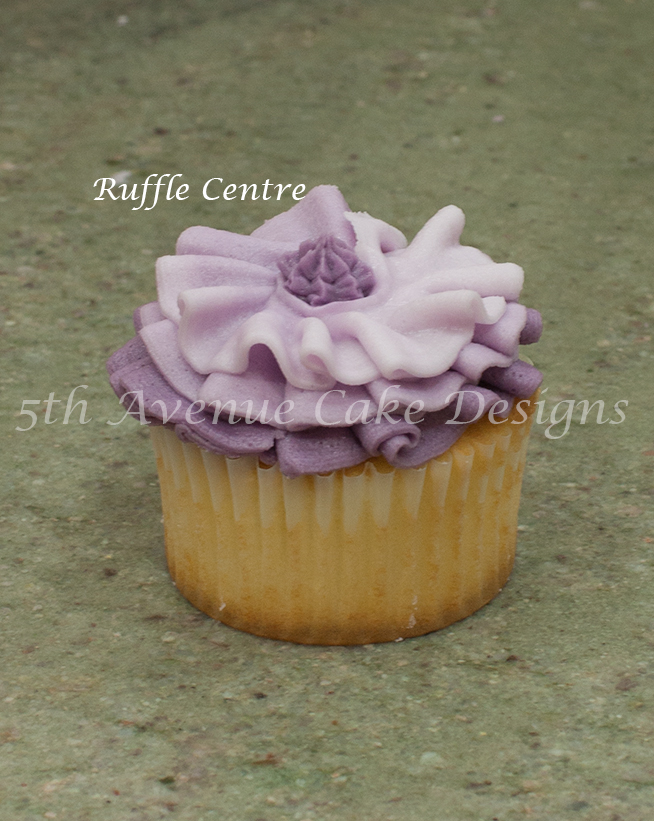 Once you have baked and cooled your cupcake on a baking rack. The ombre ruffles are quite fast to decorate. Although they have an amazing WOW factor the cupcakes themselves are simple to create. 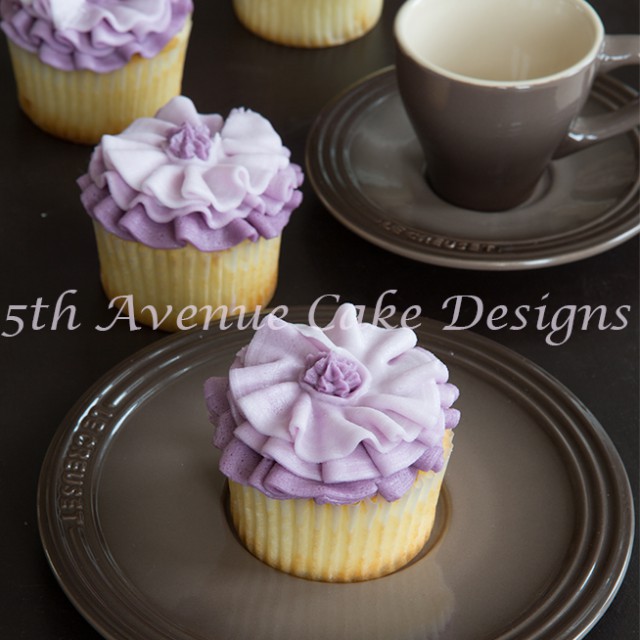 They resemble a purple blossom!

They are perfect for any occasion. You can dress them up for an elegant wedding or create a rainbow effect for a kid’s birthday party! 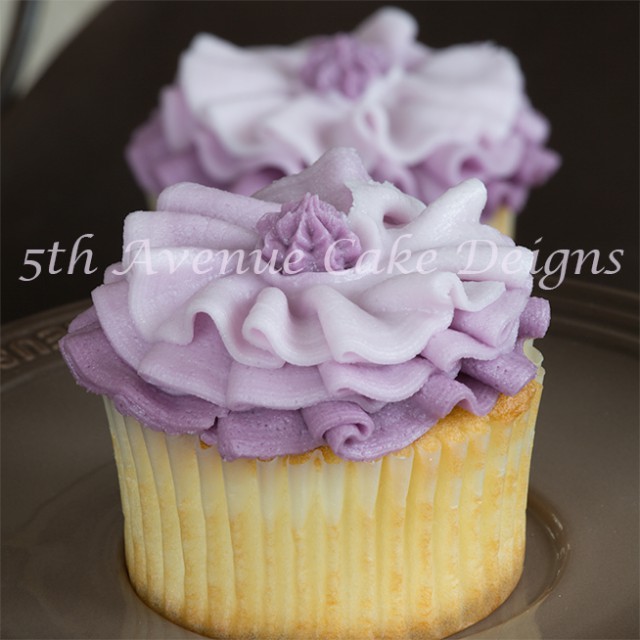