You made Me Sauce You, and All The Time You Knew It 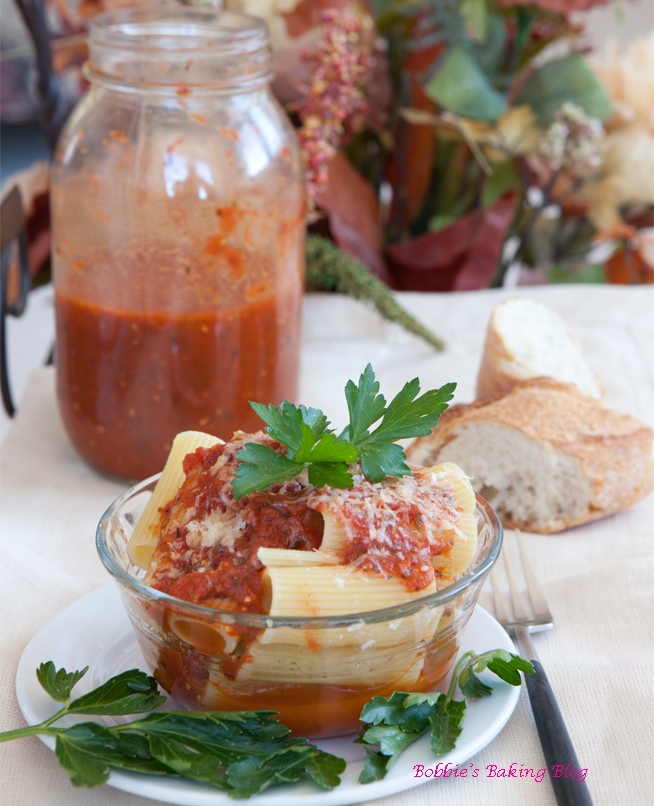 My husband, DF, is apart of a wonderful mammoth Italian family. When we announced our engagement (of course there was a huge party) my grandmother-in-law kindly with seriousness informed me I would need to learn the family sauce recipe. I thought marinara sauce how simple, not only was I arrogant in my thought, but she was not referring to marinara sauce. Thank goodness I had kept my thoughts to myself; instead asking about the ingredients. 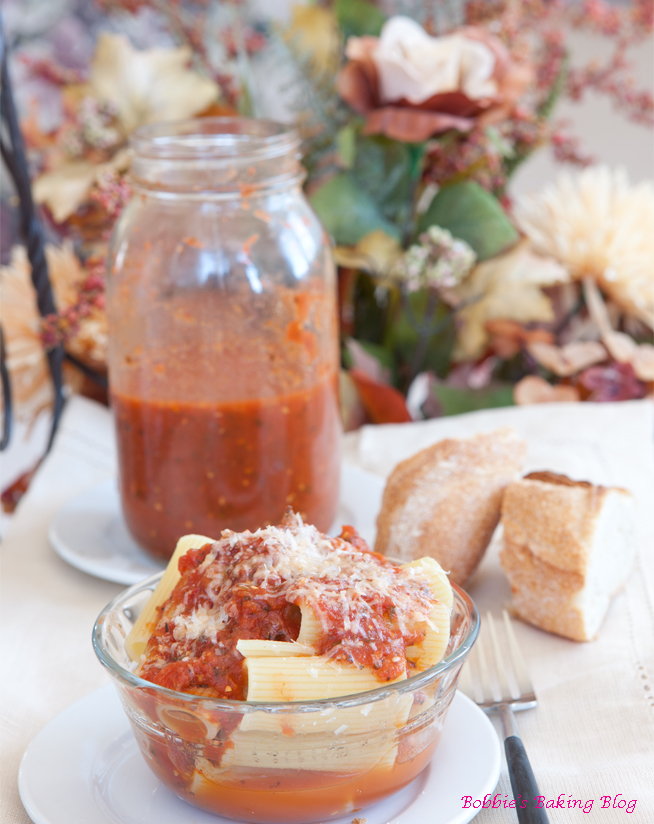 Patience is an important processes to remember

She began explaining this Italian Red Sauce, or sauce as she referred to it. The recipe had been passed down seven generations with me being the eighth; however the recipe had never been written on paper. As I reflect back to that evening I recall panic coming over me, this was my initiation into the Noto family and all I had in my arsenal was a handful of ingredients with out measurements. Being just barely 22, I thought I was doomed, I had been challenged with the family code. Later that evening as I laid in bed I realized the extended family I was about to become a member of my husband’s family (if I could recreate there special red sauce). Twenty plus years later I am happy to report I passed  and was inaugurated into the family. I must admit I added my own touches and when Sydney began cooking “The Noto Red Sauce” she added her own touches; she is the ninth generation to be honored with the secret recipe.

Every fall we spend the day cooking one large pot of sauce, place them in bell jars, to be used for a plethora of Italian recipes, including our traditional holiday lasagna. Neither DF nor Sydney would feel the Thanksgiving and Christmas dinner would be fulfilled without a large of lasagna. I hope this recipe will inspire you during the holidays to come. 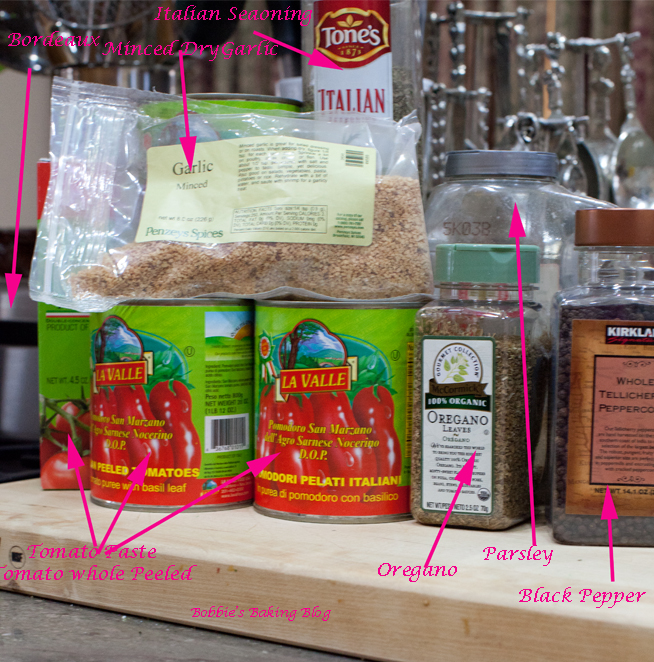 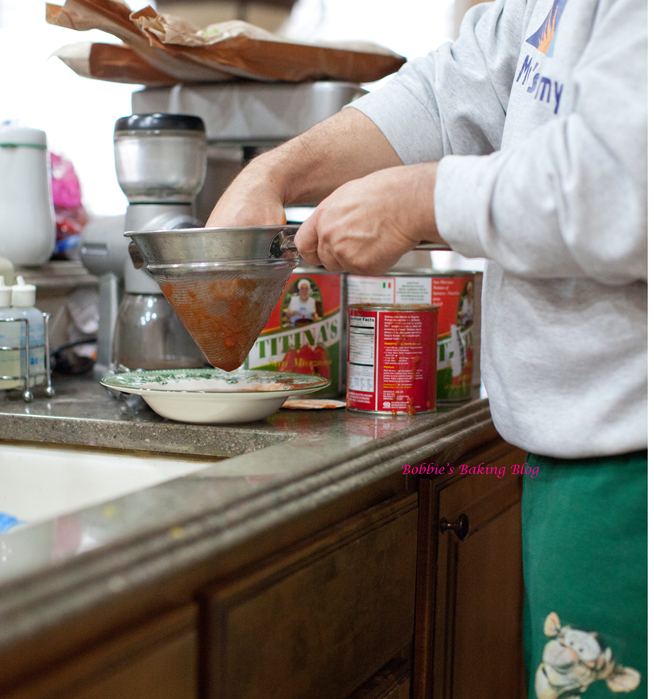 It’s a messy job, so DF has to do it. The tomatoes go in the stock pot 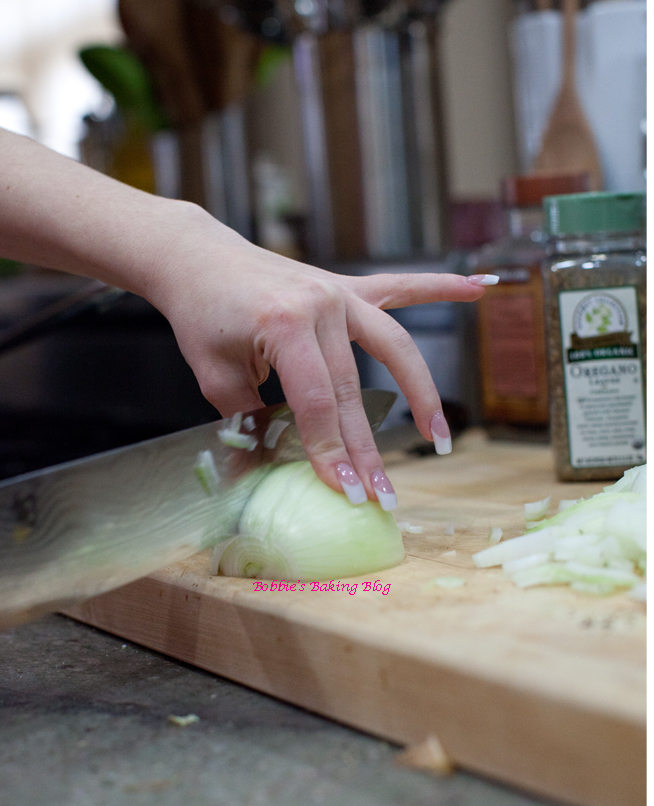 Slice the into large cubes

Salt each piece of meat and 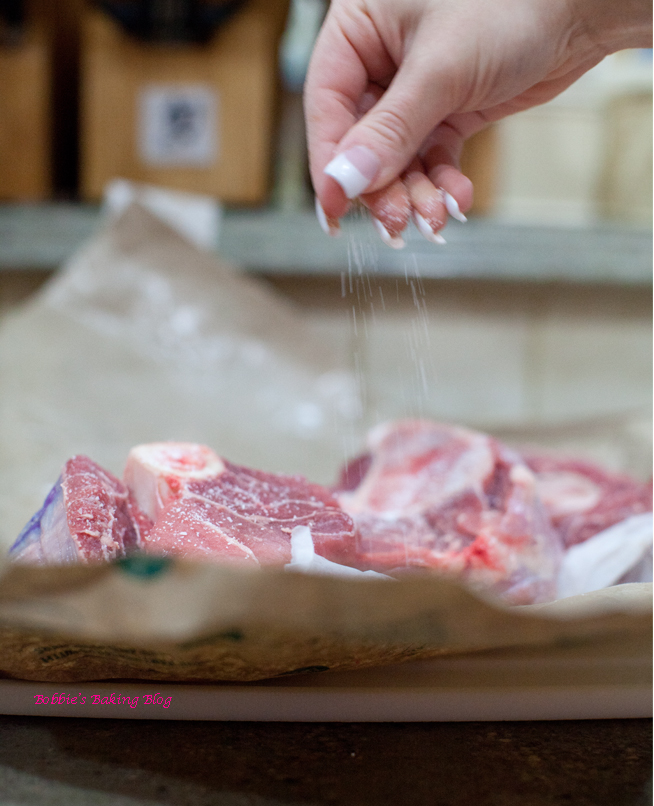 pepper each piece of meat. 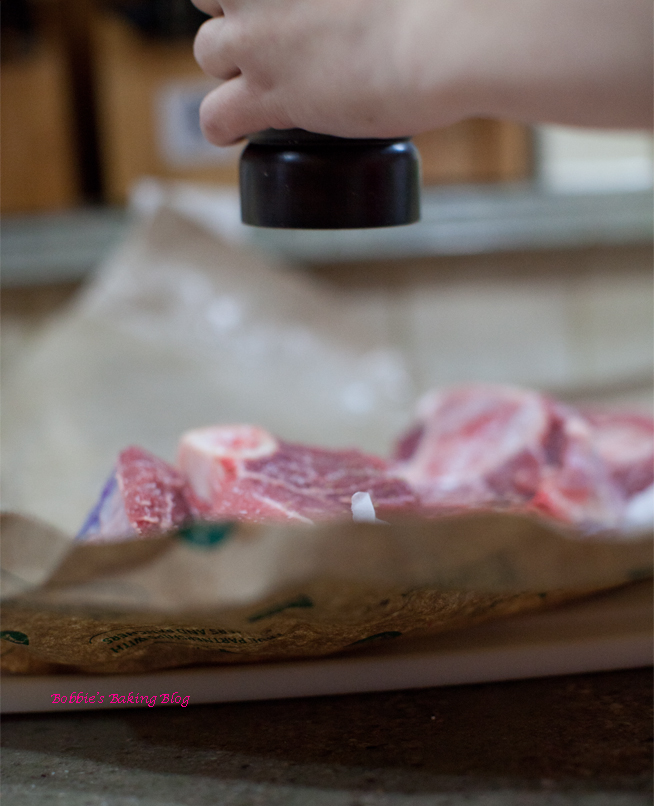 Be sure to use freshly ground pepper

In a large skillet with olive oil sear the meat, making sure to not over crowd the pan. 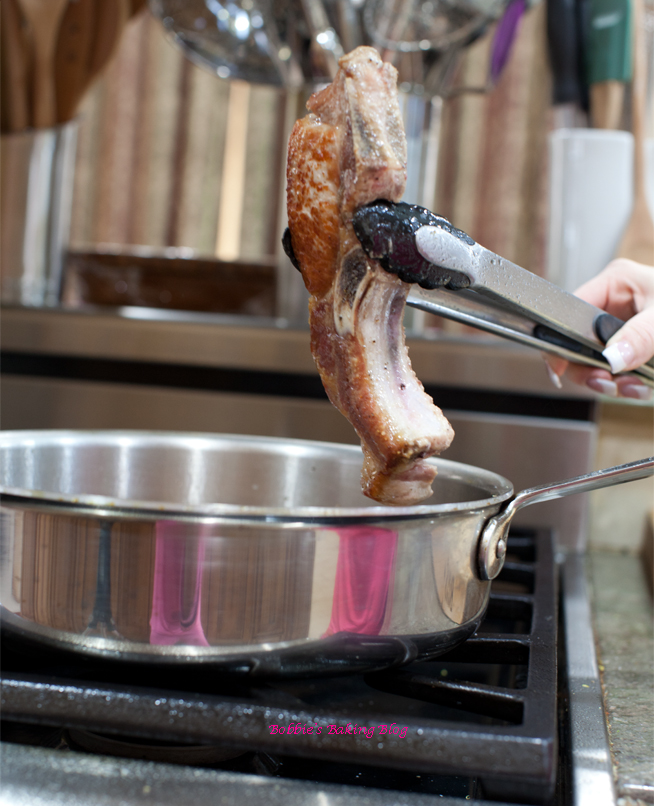 Sear each side to a caramel brown color, but don’t cook it through (this is a country pork rib) 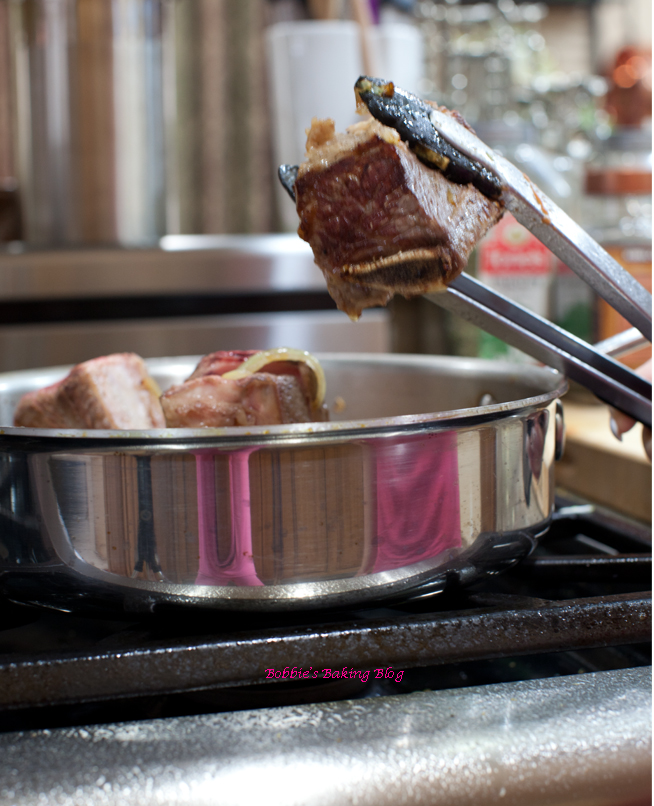 Sautée the onions and deglaze the pan, reduce the wine by half. 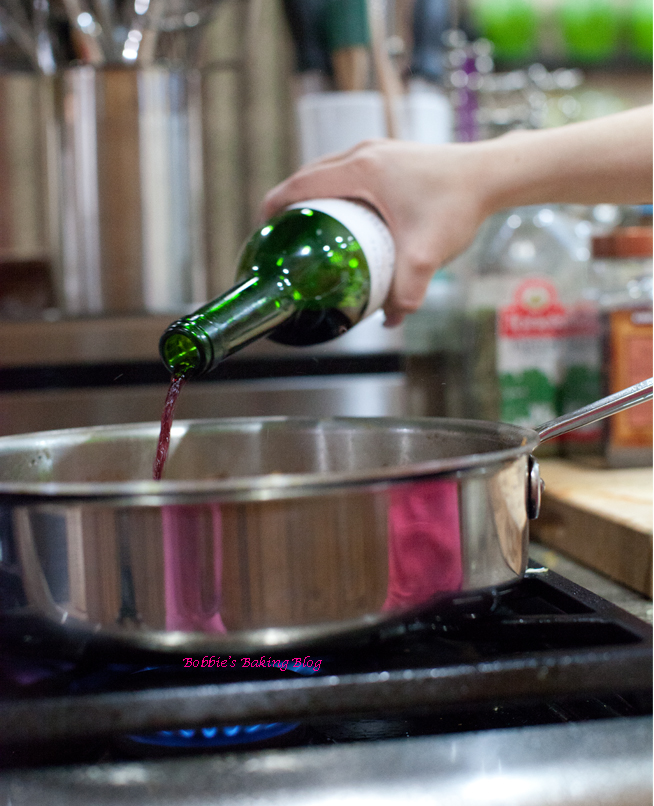 We just estimate the amount of wine

Allow the sauce to simmer another 3 to 4 hours, stirring about every 1/2 hour to prevent the sauce at the bottom of the stock pot from burning. Once the sauce has finished cooking remove from heat, bring to room temperature (about 2 hours), fill glass bell jars leaving a half of a inch from the top, wait 1 more hour before sealing. The sauce will last about 1 week in the refrigerator or 4 months in the freezer. Needless to say we freeze most of the sauce. 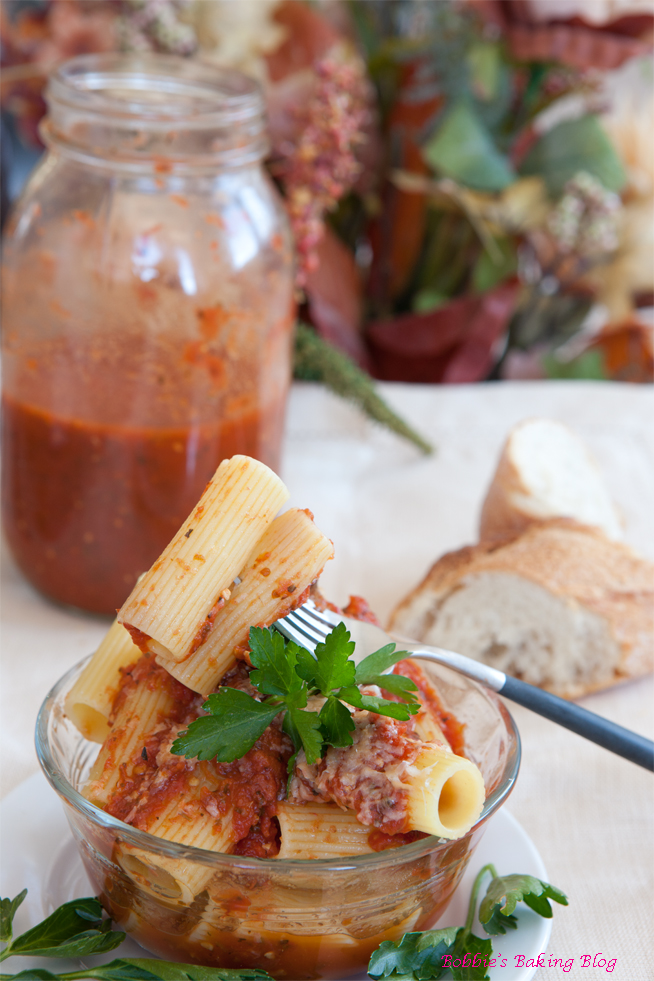