I don't Know about You, But I am In the Mood For Tiramisu 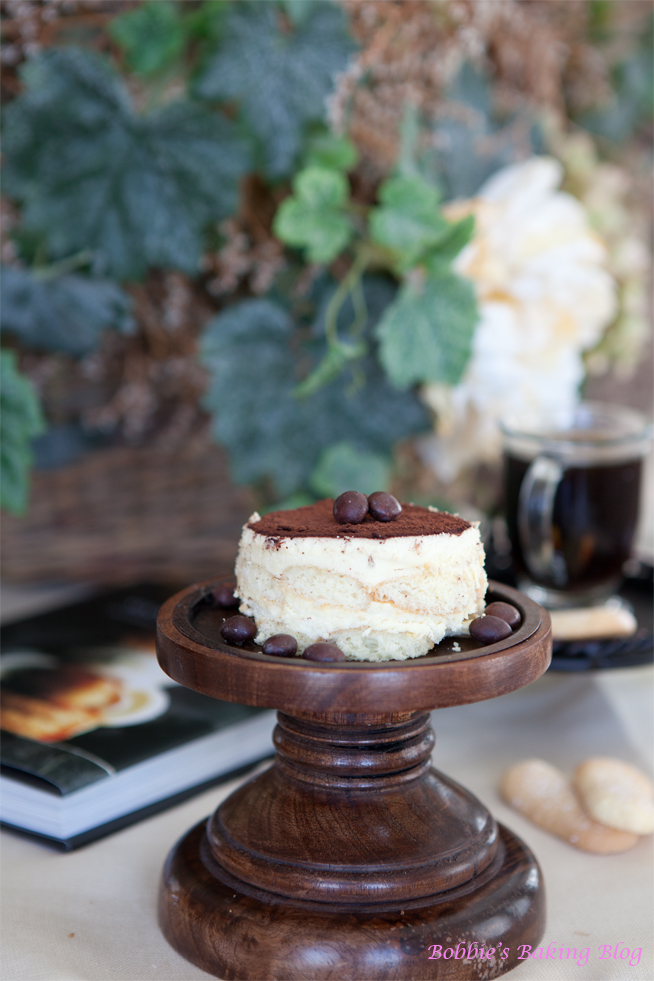 There is nothing like hot espresso, a good book, and a piece of Tiramisu!

Tiramisu is one of the most understated pastries; not only can it be a show stopping dessert for a dinner party, but a wonderful way to unwind in the  late afternoon with espresso and a good book. Last night we had a dear friend, MC, for a over a quarter century birthday dinner, along with pink peppercorn coated fillet mignon ( I had swordfish), asparagus with garlic ailoi sauce, and endive  salad, Sydney thought it would be a brilliant idea to serve Tiramisu. So we baked up a batch of ladyfingers on Sunday, that way they would be a day old prior to soaking them in the espresso. Since Tiramisu is made of egg yolks, mascarpone, sugar, espresso, some alcohol, and in our cases vanilla extract and almond extract; the ladyfingers needed to be homemade. 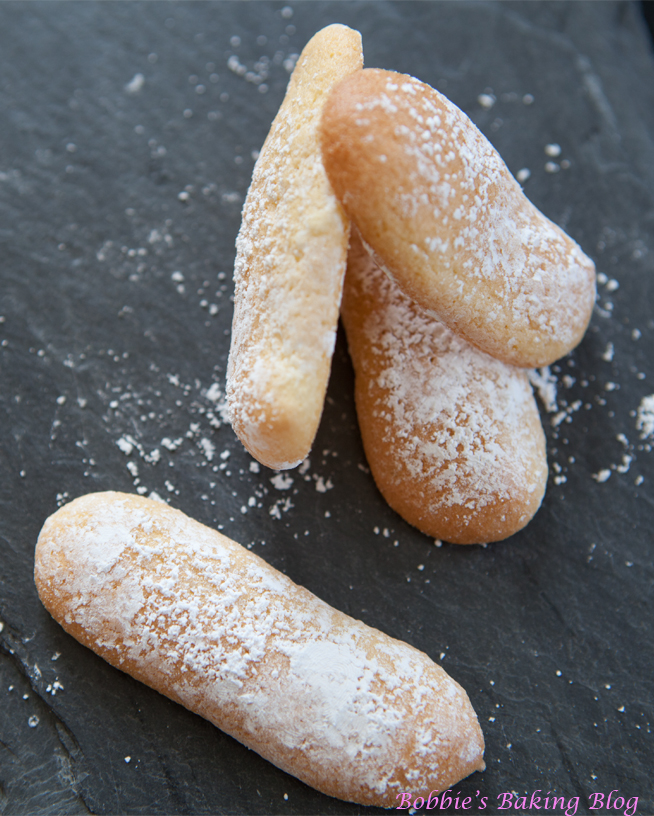 The ladyfingers are flying!

I realize many people think of a Tiramisu as an incredibly easy dessert to create, and I would not deny that, but the presentation and the flavors chosen to be added to the egg yolk crème can add a “WOW” factor, that will leave your guests feeling special and wanting more! Which is exactly what happened last night. Both MC an DF had a look of amazement when the Tiramisu was presented and their eye glazed over with fulfillment as they savored  the first forkful. I must admit my favorite time is when I watch others enjoyment as they experience the tastes of a special dessert, created for them! 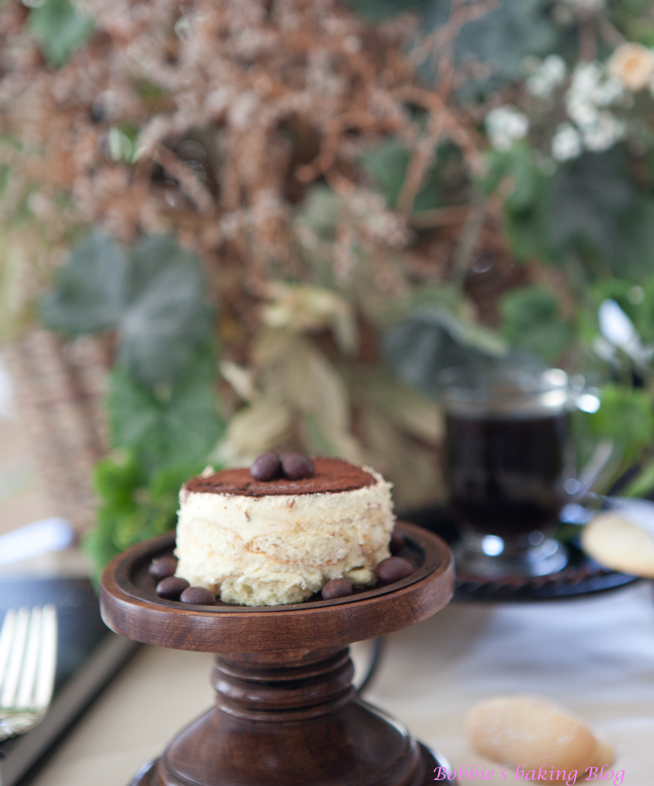 In a bowl of a standing mixer, with the whisk attachment add the egg yolks, 100-grams/ ½  of sugar on medium-high speed. Whisk the egg yolks till they fall back on themselves in ribbons, have turned a pale yellow, and doubled in volume. Reduce the speed to low and slowly pour the warm water into the yolk mixture, raise the speed to medium-high again until the mixture has become thick and fall in ribbons.

Transfer to large mixing bowl and sift flour, without mixing it in, over the yolks and set aside. 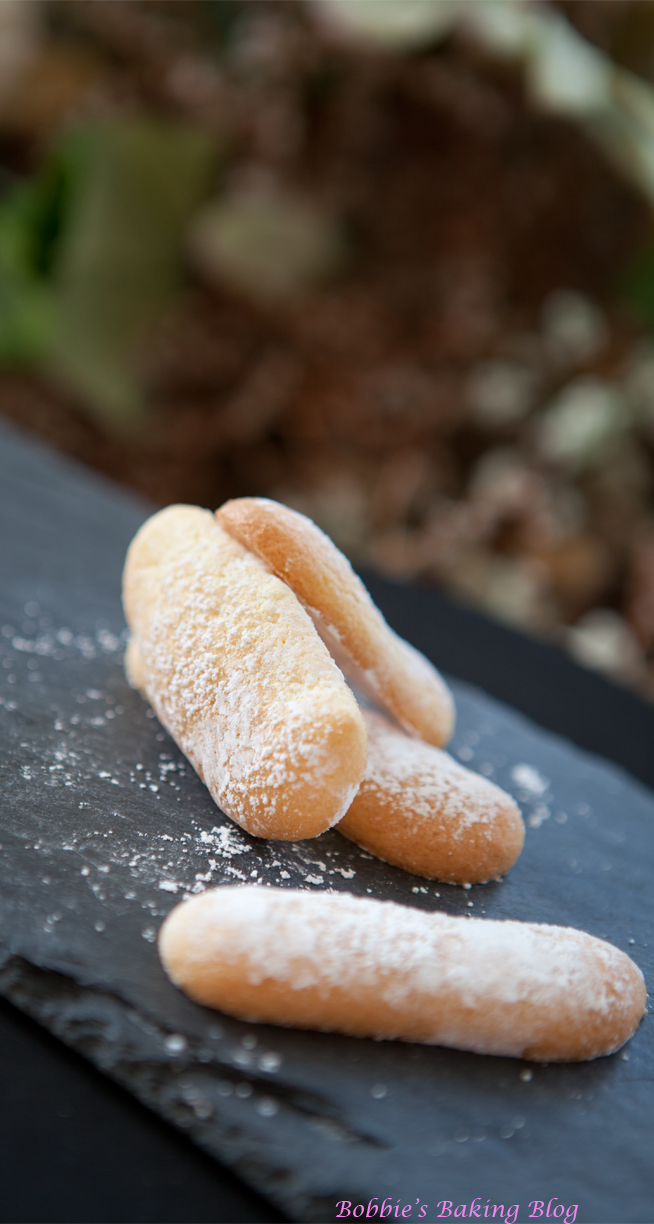 Ladyfingers are wonderful by themselves with espresso

In a VERY clean bowl, with the whisk attachment, of a standing mixer whisk egg whites and egg white powder on medium speed. Whisk the egg whites till soft peaks form and slowly add 50 grams/ the second half 1/2  of sugar. Continue to whisk for about 2 more minutes or until medium peaks form. Once medium peaks have formed add the vanilla extract, 50 grams/ 4-Tablespoons of sugar; raise the speed to high till stiff peaks form.

Prepare the pastry bag. Quickly place about ½ the batter in a piping bag. 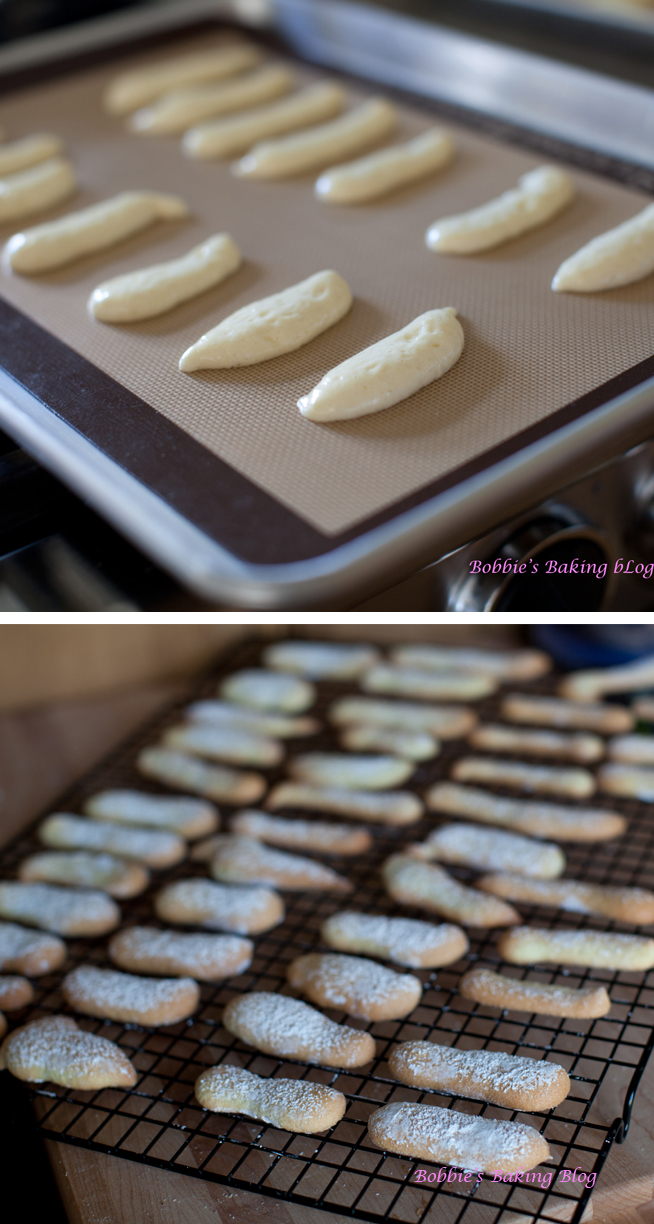 Pipe 7.5 cm/ 3-inch long strips, leaving about ¼-inch space between each strip. Be sure to hold the pastry bag high enough above the surface so the batter can fall freely from the tube.

Bake for about 7 minutes or until the sponge springs back when pressed in the center. The ladyfingers may be touching each other after baking, sprinkle with icing sugar, what about 20 seconds and sprinkle once again.

Remove the biscuits on the silpat or parchment paper to a cooling rack. 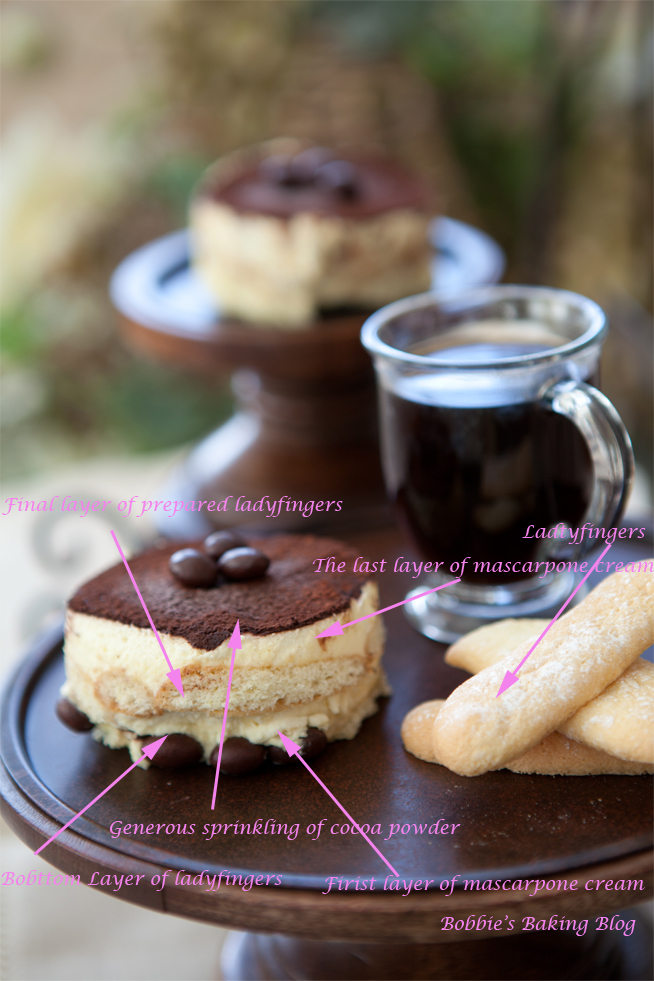 Diagram of the structure of Tiramisu

Prepare your mise en place. Place the bowl and whisk of your standing mixer in the freezer at least 10 minutes prior to working.

In a Bain-Marie or double boiler simmer the water, in top part or bowl add the egg yolks, the  sugar, 1 /2-Tablespoons Marsala, and 1 ½ -Tablespoon rum whisk together. Once the ingredients have been whisked together place the bowl on top of the simmering water. Continually whisk the yolk mixture until the yolk mixture begins to thicken, lightens in color, registers with a thermometer 75 degrees C/ 170 degrees f and triples in volume. Lift the bowl off the heat and allow to cool.

Place plastic film over the custard and allow to come to room temperature.

In a bowl of a standing mixer beat the custard and the mascarpone into creamy mixture.

Whip the heavy cream to soft peaks, add the vanilla, and almond extract to stiff peaks.

Gently fold the whipped cream into the custard. 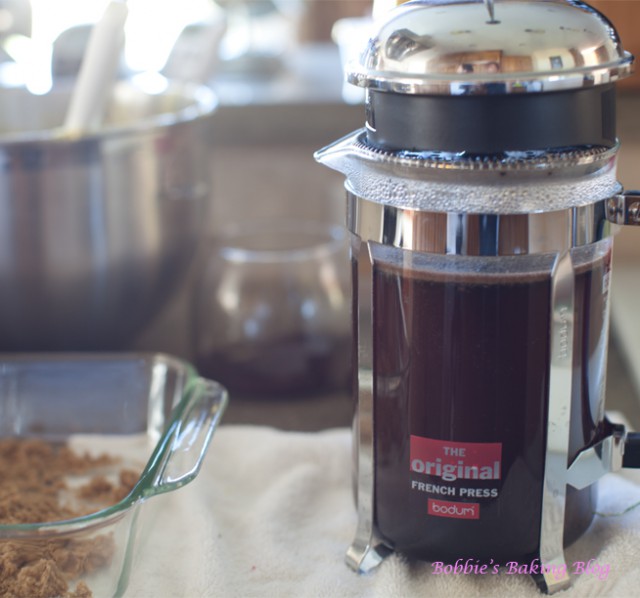 Line the baking dish with a layer of ladyfingers, line against each other. With an off-set spatula spread ½ of the custard mixture, layer again with soaked ladyfingers, and spread the second half of custard over the ladyfingers.

Sprinkle evenly with a fine mesh strainer the cocoa powder, freeze over night and cut with a biscuit cutter. 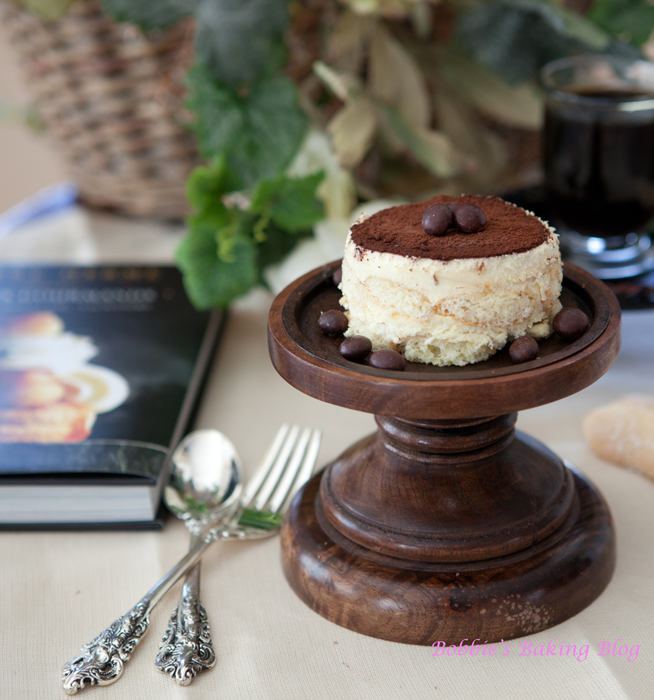