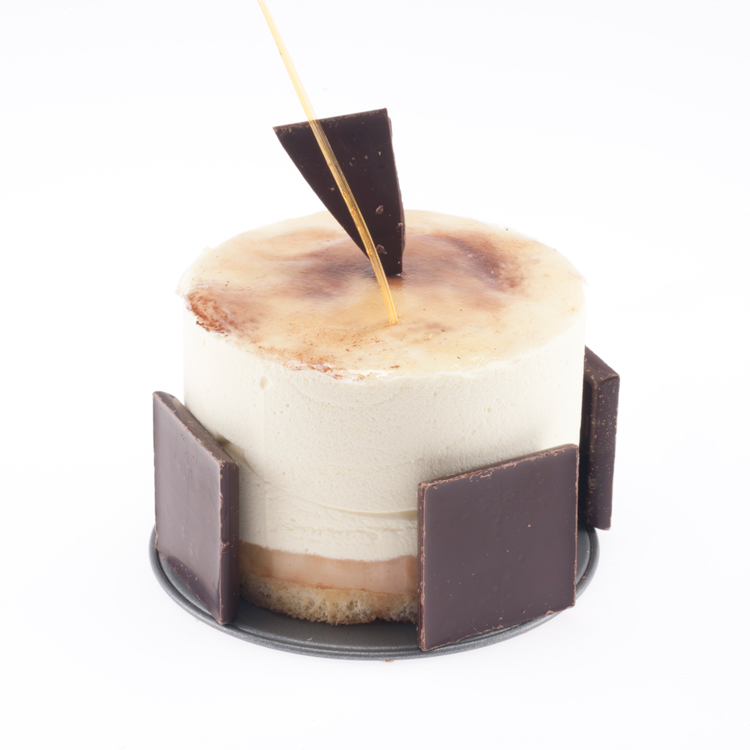 Sydney and I were trying to challenge ourselves with a dessert we had never made before. I recently purchased these amazing pans and a few books about working with these pans. We thumbed through the book and both us fell in love with ” bergamotier,” We changed the flavor to Framboise ( if you have read my blog than you know we love raspberry and strawberry), but we absolutely loved the look and concept. 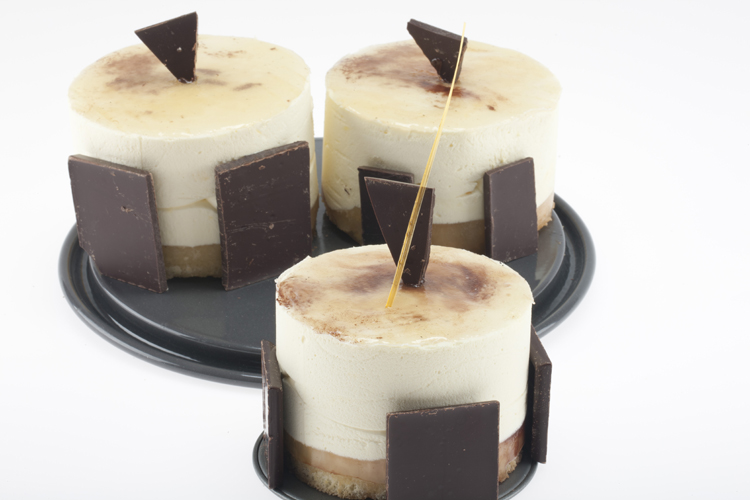 The composition consists of Framboise mousse with a caramel mousse submerged into the framboise mousse on top of a framboise sponge, and decorated with a neutral glaze and chocolate squares surrounding the mousse. It “ruled” DF would be the taster, I wish I had a photo of his reaction. He took a bite  I noticed his eyes grew large and for a good 3 minutes he was silent. I thought Sydney and I were going to kill him, here we were awaiting with baited breathe to know if we had a winner. Finally he announced it was better than just delicious, Sydney and I, at the same time, exhaled.

I am attempting to describe what was happening in the kitchen as we started building this dessert. We began with caramel mousse, it needed to be frozen for at least 6 hours. The first two attempts were a flop, the caramel became a gummy string when added to the cream, both times. Sydney and I sat down and discussed each component and how we implemented it.

Meanwhile DF came into the kitchen and was tasting the flops, I just could not resist decorating his face with a caramel mousse flop. He in return decorated my face, Sydney was keeping a far distance and laughing so hard her ribs began to hurt. I was not about to let DF have the last “joke” so here it is. 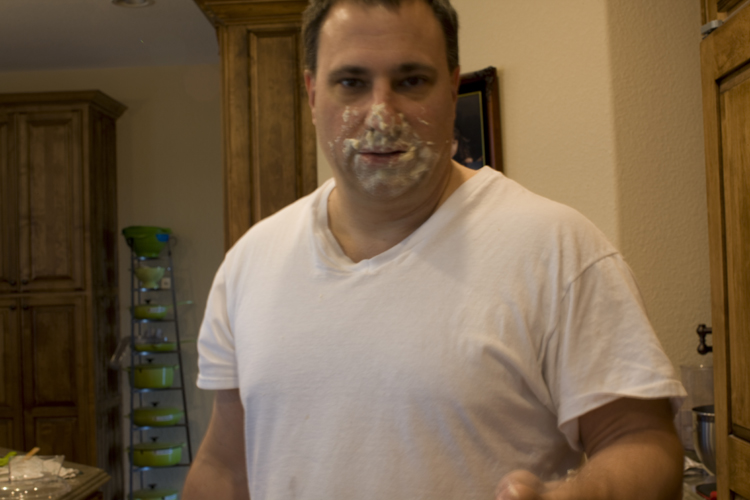 DF whipped caramel creamed! He was moving to grab the camera, sorry about the fuzziness.

Back to the caramel mousse, third time was the charm. The process was dry heat the sugar till it is dark, but not burnt. Than dilute the melted sugar with boilng whole milk, remove from heat, temper the egg yolks, pour the mixture back into the pan. Cook till mixture reaches 85 degree C/ 185 degreess F, incorporate gelatin and cool down to add to the whipped cream. Sounds fairly easy and  direct, except when and how to homogenize the two components was the hard part. The trick seems to be pour the cooled caramel in the cream prior to the cream developing soft peaks. 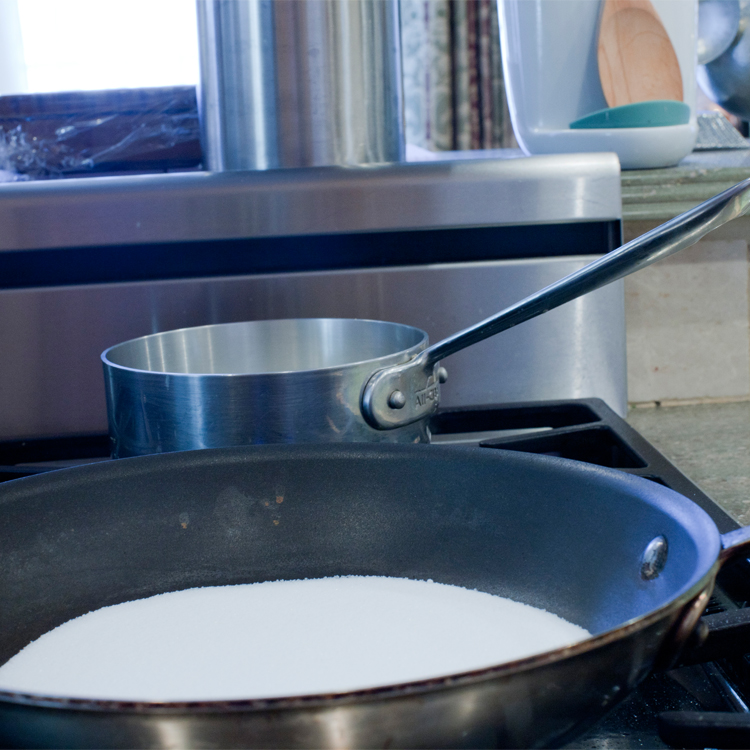 Dry sugar and the milk waiting to meet

Once the caramel mousse was complete it was time to pipe them  into the flexipan,  place them in the freezer. Allowing them to freeze a minimum of 6 hours to over night. It’s extremely important for the caramel mousse to be frozen in order to press down into the framboise mousse. Remember the dry sugar melting method needs extra attention, as it burns faster and is extremely hot. 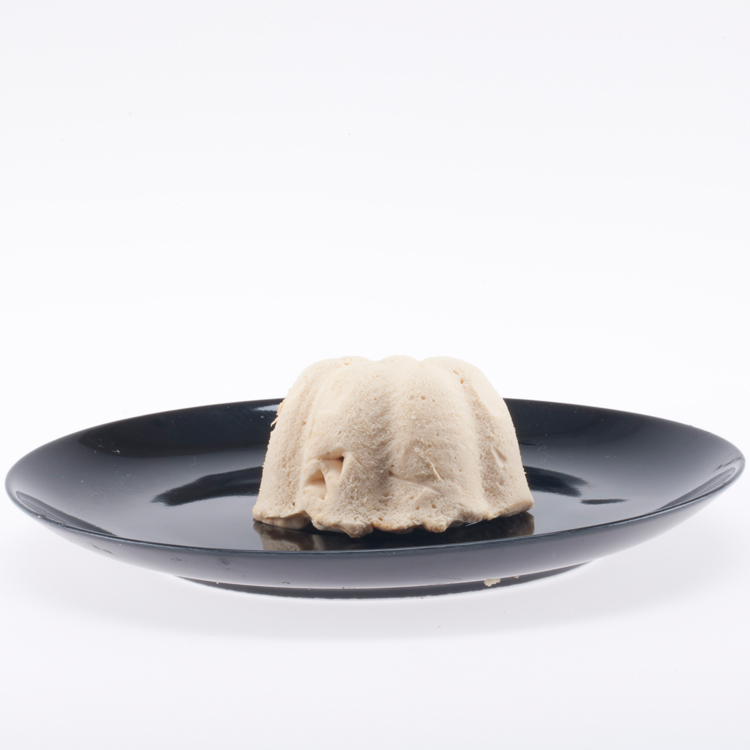 This Caramel Mousse can be a dessert on it’s own, or with fruit coulis or chocolate sauce

While the Caramel Mousse is chilling in the freezer, we began the Framboise Raspberry sponge, piped it into ring pans, baked them for about 10 minutes, and allowed them to cool in there ring.

While the sponges were cooling down we began the Framboise Mousse, which will eventually be pipped on top of the sponge.

Temper the egg yolks with the hot caramel. Pour the milk-yolk mixture back into the pot. Cook on medium until the mixture coats the back of a wooden spoon and registers 85ºC/185ºF on a thermometer.

Remove from the heat, add the soften gelatine, stir to cool, and pour in mixture when whipped cream has soft peaks. Pour into shaped pan. Set aside. 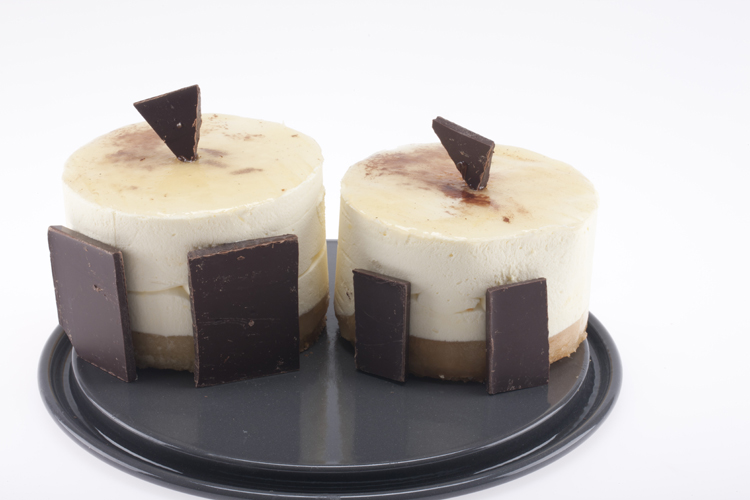 In bowl of your standing mixer add yolks and sugar till ribbons form, carefully sift four, almonds, and starch switching to a paddle attachment beat until a paste forms. Set aside.

Whisk meringues (egg whites), incorporate raspberry essence. Sacrifice about ¼ of the meringue and beat in the standing mixer to loosen paste. Carefully add meringue with a large spatula in two batches.

Using a piping bag with a plain nozzle (8mm) pipe 6mm/1/4-inch circles onto a silpat.

Cook the egg yolks and the syrup in a bain-marie until temperature reaches 80ºC/175ºF. Move the mixture to your standing mixer. While still warm add soften gelatin, mixing till completely homogenized. Once cooled to room temperature incorporate into whipped cream and set aside. 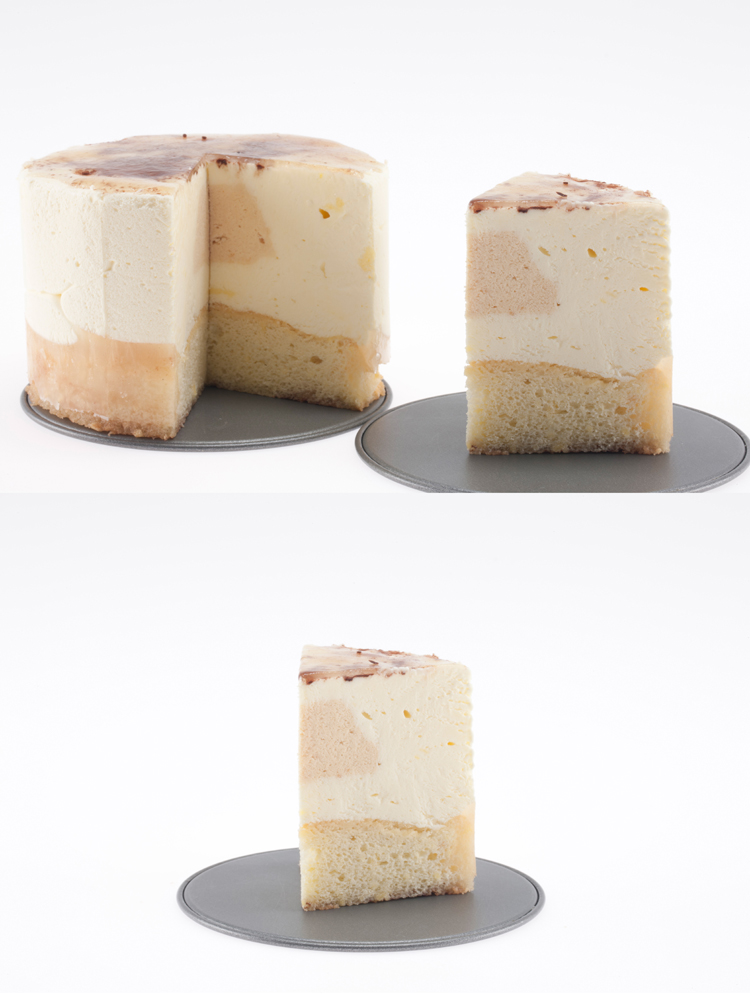 The inside of the cake

You will be preparing this upside down. Line the rings with acetate strips. Using a piping bag with open nozzle fill each ring with raspberry mousse.

Place a half-sphere of caramel mousse on top pressing down so that the sides of the raspberry mousse rises up against the ring.

Fill again with the raspberry mousse and finish with a biscuit.

Remove the mousse cake from the freezer, sieve a little cocoa powder over the top; ice each cake with neutral glaze. Remove gently from ring pans and the acetate strips. 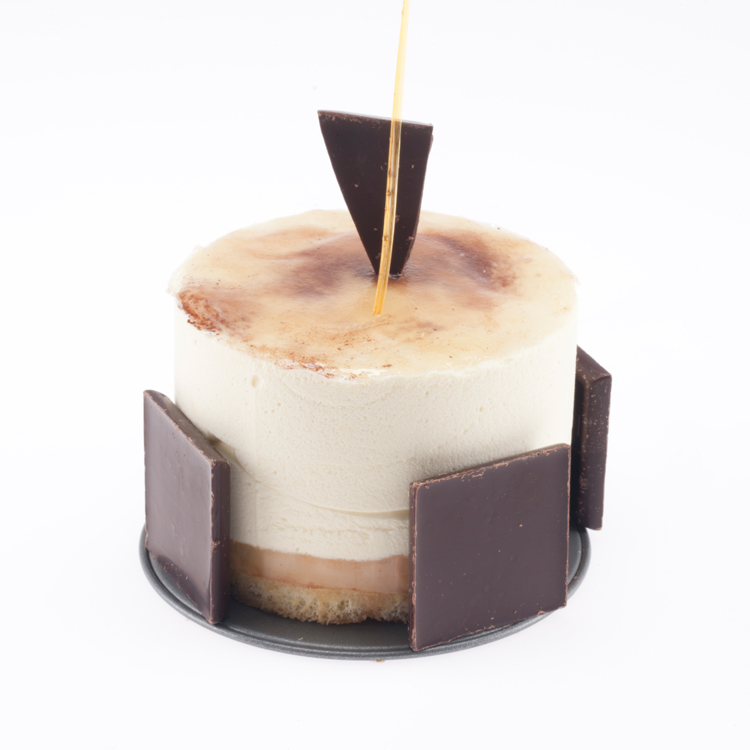